100 years of discovery of Tutankhamun’s Tomb: And the missing heart of the boy-king 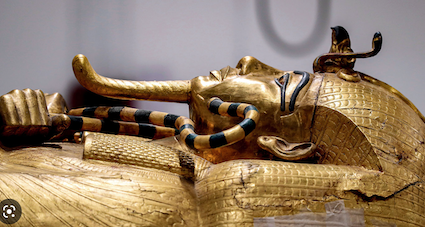 On November 4, 1922, a step in the rock was uncovered by a worker who had participated in the Valley of Kings excavations led by English archaeologist Howard Carter in the valley of the great Nile River. The members of the expedition did not yet know they were on the verge of making a find that would change Egyptology forever.

Carter telegraphed his financial patron Lord Carnarvon and after he arrived, the excavation went on. A passage full of debris was discovered behind a door that bore the name of Tutankhamun, a mysterious young pharaoh whose existence was allegedly first discovered by Carter’s friend Ernest Harold Jones, as some scholars believe. At the other end of the tomb passage, a second door was found on November 26.

Carter later described the moment he first saw the contents of the next room through a small breach. When Carnarvon asked the Egyptologist if he could see anything, Carter replied: “Yes, wonderful things.”

That second room contained more unique burial objects than could have been expected by the archeologists, but in the following chambers, there was certainly more to find – including Tutankhamun’s sarcophagus with untouched contents.

A total of more than 5,300 well-preserved items were discovered in the tomb, shedding light on the lifestyle of the royalty of Ancient Egypt’s New Kingdom.

The golden funeral mask of the pharaoh became one of the most well-known symbols of Ancient Egyptian civilization.

The finding of the first known nearly intact Ancient Egyptian royal burial led to what became known as “Tutmania” in the West, sparking media frenzy, and attracting tourist crowds to the tomb, creating numerous myths and popular theories, one of the most famous being the so-called “curse of the pharaohs.”

The deaths of several expedition members – one of them being Lord Carnarvon – that occurred shortly after the discovery were attributed to powerful ancient magic and later to bacteria or radiation. However, evidence shows that the “curse” does not exist at all, as most of the tomb’s visitors were alive and well long after leaving it.

After 100 years, the site is still being studied and there is still speculation regarding its secrets.

For instance, modern British Egyptologist Nicholas Reeves is known as the author of a controversial theory, according to which there’s a hidden room in the tomb where the remains of the famous Queen Nefertiti, one of Tutankhamun’s predecessors, lie.

Another mystery is the cause of Tutankhamun’s death. The boy-king took the throne when he was eight or nine years old and reigned until dying at the age of approximately 19. Subsequent research of the mummy showed that the pharaoh had malaria before his death, and his leg was broken as well, but it is still unclear whether these factors were connected to the monarch’s demise.

Tutankhamun ruled from approximately 1332 to 1323 BC, during the end of the Eighteenth Dynasty, the first dynasty of New Kingdom Egypt. The pharaoh’s mummy is among the most well-studied in the world. It has several unique features – for example, Tutankhamun’s heart was not found, although the organ is present in most Egyptian mummies; a scarab amulet that, according to Ancient Egyptian beliefs, was obligatory to be put near a mummy’s heart, was also not found where it belonged.

Another feature of the entombment is that the mummies of two female fetuses were buried along with the ruler. These are the bodies of Tutankhamun’s stillborn daughters.

In 1926, after initial examinations, Tutankhamun’s mummy was placed back in the tomb; there it lay in a coffin inside a sarcophagus with a glass sheet letting tourists see the coffin. In 2007, the body was placed in a glass box with climate control, which was also built inside the tomb. Two years later, a replica of the tomb was opened for tourists to lower the stress damaging the original.

Most of the tomb’s treasures were sent to the Egyptian Museum in Cairo by archaeologists. Several items are believed to have been stolen by Carter and were found in his private collection as well as in a number of museums.

Many of those objects were eventually returned to Egypt.

Next year is expected to bring about a new era in the history of Egypt’s unique heritage and the collection of Tutankhamun’s Tomb in particular, when the Grand Egyptian Museum in Giza opens. This will be the first time in history that almost all the items from the famous tomb, including the pharaoh’s mummy, will be displayed in one museum.

The Supreme Court will next Monday hear requests challenging the use of emergency powers to block the controversial BBC documentary on Prime Minister Narendra...

Why Turkey trusts Russia—and not the United States: In Erdogan’s words!

Guess who is UK’s top taxpayer: A Russia-born billionaire!