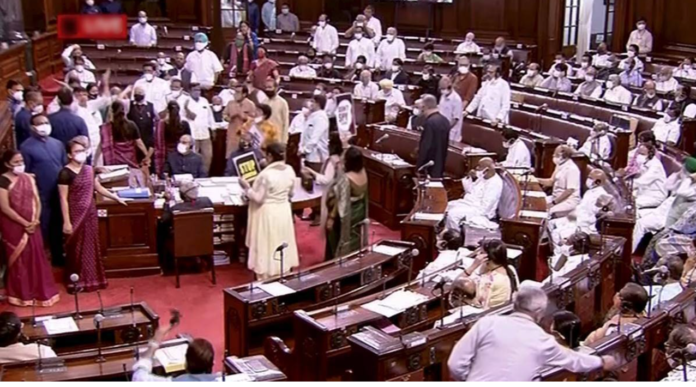 Twelve Members of Parliament were suspended on the opening day of the winter session of Rajya Sabha on Monday by a motion moved by the government for their “violent behaviour” on August 11, 2021 in the Monsoon Session.

The MPs include six from the Congress, two each from Trinamool Congress and Shiv Sena and one each from CPI and CPM—Phulo Devi Netam, Chhaya Verma, Ripun Bora, Rajamani Patel, Syed Nasir Hussain and Akhilesh Prasad Singh of the Congress; Dola Sen, Shanta Chhetri of Trinamool Congress; Priyanka Chaturvedi, Anil Desai of Shiv Sena; Elamaram Kareem of CPM; and Binoy Viswam of CPI.

The motion was moved by parliamentary affairs minister Prahlad Joshi and passed by voice vote even as the Opposition protested.

The members had been suspended under Rule 256 of Rules of Procedure and Conduct of Business in the Rajya Sabha. They would remain suspended for the rest of the current session.

The suspension notice said: “That this House takes cognisance and strongly condemns the utter disregard to the authority of the Chai, complete abuse of rules of the House persistently thereby wilfully obstructing the business of House through their unprecedented acts of misconduct, contemptuous, unruly and violent behaviour and intentional attacks on security personnel on the last day of 254th Session of Rajya Sabha (Monsoon Session) i.e, 11th August 2021 thereby lowering the dignity of and bringing disrepute to the August House by the following members and resolves, for above compelling reasons, to suspend these members from the service of the House for the remainder of the 255th session under rule 256 of Rules of Procedure and Conduct of Business in Rajya Sabha.”

The government’s report on the ruckus states that a male marshal was choked by CPM MP Elamaran Kareem while a female marshal of the Rajya Sabha was assaulted by Chhaya Verma and Phulo Devi Netam, Congress MPs.

The report was submitted to the Rajya Sabha chairman after the House was suspended for the season.

In a joint statement, the opposition said the suspension was “unwarranted and undemocratic” and that the floor leaders of the parties will have a strategy meet tomorrow.

The letter, however, was not signed by the Trinamool Congress, which is skipping today’s opposition meet as well.

The government also denied opposition claims of “outsiders” being brought in and the matter was finally referred to a special committee of MPs for investigation.