12 Union ministers resign ahead of the cabinet expansion in evening: Even representation 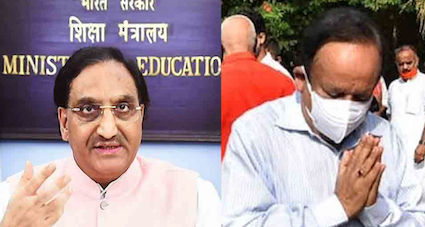 A spate of Union ministers have resigned ahead of the Modi cabinet expansion on Wednesday evening, including health minister Dr Harsh Vardhan.

Quite a few of them are heavyweights, like Education minister Ramesh Pokhriyal Nishank, Labour minister Santosh Gangwar and Chemicals and Fertilisers minister Sadanand Gowda.

The entire list of Union ministers who have vacated their chair are as below:

Such resignations are a norm to make the head of the cabinet, in this case the prime minister, given a freedom to choose or expand his cabinet as he wants.

The cabinet expansion was also due because of death of union ministers and the exit of NDA allies Shiv Sena and Akali Dal.

Word has it that prominent names like Jyotiraditya Scinda, Sarbananda Sonowal, Narayan Rane and Meenakshi Lekhi would be inducted in the Union cabinet. NDA partners, such as JDU, Apna Dal and LJP are also eyeing a berth.

It’s learnt that there would be 14 ministers below the age of 50. It would be a perfect balance of castes, regions and experience, as per sources.

The council of ministers would also have a mix of experienced professionals — with 13 lawyers, six doctors, five engineers, seven civil servants, seven with research degrees and three with degrees in business.

There will be 11 women ministers from across nine states.

Today’s reshuffle is the first in PM Modi’s second term. The Union Cabinet, which can have 81 members, currently has 52 ministers. It means 29 more could be inducted in the cabinet. The probables include former Assam Chief Minister Sarbananda Sonowal, former Congress leader Jyotiraditya Scindia and Narayan Rane.

In the new ministry, there will be record 12 ministers belonging to the Scheduled Castes, who are from eight states — Bihar, Madhya Pradesh, Uttar Pradesh, Maharashtra, West Bengal, Karnataka, Rajasthan and Tamil Nadu. Besides, 27 of the minsters belong to Other Backward Classes, five of whom will be in the cabinet.

There will also be a record eight ministers — three of them in the cabinet — who belong to the Scheduled Tribes and come from Arunachal Pradesh, Jharkhand, Chhattisgarh, West Bengal, Madhya Pradesh, Maharashtra, Odisha and Assam.

The new ministry also cuts across communities. There will be one Muslim, one Sikh, one Christian and two Buddhist ministers. Three of the cabinet ministers are religious minorities.

This is the first revamp of the Council of Ministers since PM Modi started his second term in May 2019.