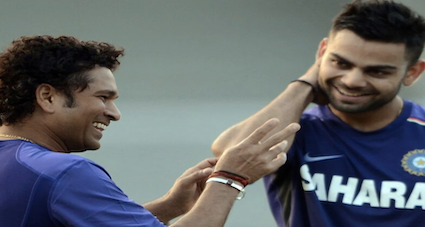 India’s cricket star Virat Kohli has recalled the day when India won the World Cup in 2011 beating Sri Lanka by six wickets at the Wankhede Stadium.

When Virat walked out to bat, India were in a spot of bother, being 31 for two, chasing 275 runs to win. Both Sachin Tendulkar and Virender Sehwag were back in the hut.

“I remember the pressure of walking into bat, 2 down for 20 (2-31) I think it was. Sachin and Sehwag both got out. I was walking in, Sachin paaji had a brief chat with me and he said build a partnership. And we did build a partnership, me and Gautam Gambhir. I got 35, probably the most valuable 35 I have scored in my cricketing career. I felt very happy that I was a part of putting the team on track and contributed in whatever way I could,” Kohli said in a video posted on the official Twitter handle of Royal Challengers Bangalore.

“The thrill of winning the World Cup was unbelievable and the atmosphere of the crowd singing ‘Vande Mataram’, ‘Jo Jeeta Wahi Sikander’ song, it was so surreal and it is still so fresh,” he added.

fter the match got over and India had won, Kohli had famously remarked, “Tendulkar has carried the burden of the nation of 21 years; it was time we carried him.”

Talking about what he said, Kohli he had said: “I said what I said. It was true. His legacy had to be taken forward, massive shoes to fill. I think we have tried to contribute to Indian cricket as close to what he can. His achievements are so great and far-fetched, it feels surreal to be in that process. 11 years later, I stand here. I said that I had said then. Now I understand the weight of those expectations.”

The win in the summit clash against Sri Lanka came on the back of match-winning performances from Gautam Gambhir and MS Dhoni.

Gambhir scored 97 while Dhoni played an unbeaten knock of 91.

This was India’s second 50-over World Cup triumph and it came 28 years after Kapil Dev and his team made the nation proud at the Lord’s cricket ground in 1983 after defeating the mighty West Indies led by Sir Clive Lloyd.