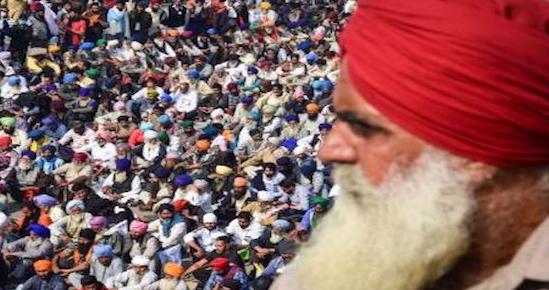 A reward of USD 250,000 has been put up by the banned outfit Sikhs for Justice (SFJ) for protesting farmers if they hoist Khalistan flag at India Gate in the national Capital, says a report.

This was cited by the Centre to Supreme Court in one of the documents they submitted regarding the presence of separatist elements in the farmers’ protests in New Delhi.

The government is expected to file an affidavit in the Supreme Court on Wednesday, confirming that there is evidence of “Khalistani groups” having infiltrated the farmers’ protests.

The Chief Justice of India, SA Bobde had asked the Centre to put it on record, in reply to which the latter had said the government would compile information from the Union home ministry and submit the affidavit.

The protesting farmers are firm to take out a tractor rally on the Republic Day in the Capital.

Twelve Members of Parliament were suspended on the opening day of the winter session of Rajya Sabha on Monday by a motion moved by...