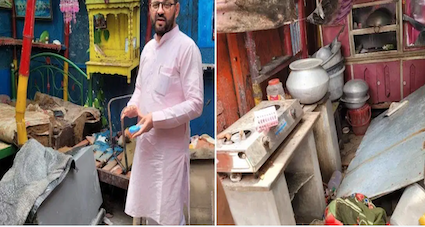 The National Human Rights Commission panel member Atif Rasheed made a shocking revelation that as many as 40 houses that belonged to Bharatiya Janata Party workers had been burnt to the ground, adding that nobody knows the whereabouts of the BJP activists for two months, according to a report.

He further alleged that he was threatened by Trinamool Congress goons on his visit to Jadavpur where sectarian and political violence had ravaged the area post the electoral victory of TMC.

“During probe, it has been found that more than 40 houses have been destroyed here. We are being attacked by goons,” says an NHRC official. pic.twitter.com/iTUcBIZ2GU

According to the video that is doing rounds on social media, Rasheed, who is also the vice-chairman of the minority commission was investigating the ground situation in Jadavpur when he was threatened by an irate mob of men and women.

He further said that the mob was threatening him because he was recording a video of the burnt down houses.

While CISF personnel can be seen trying to control the mob, Rashid can be heard claiming that he and his team were being attacked by a TMC mob.