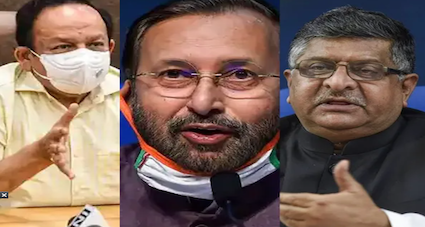 Those being sidelined made bigger news than those who were inducted in the Modi cabinet’s reshuffle here this evening.

In all 43 new ministers took the oath in which 36 were new faces and seven got promotions.

No less than 20 per cent ministers—a fifth of the council of ministers—were dropped though it’s believed that the Big Four—Union ministers for home, defence, foreign affairs and finance—would remain unchanged.

The following are the new ministers who are minister from today onwards, the portfolios to be announced in due course.

Some of the youngest new ministers and a little bio on them—their age in bracket—is as below:

The youngest in the new Modi government cabinet is the 35-year-old Pramanik who is a Lok Sabha MP for Cooch Behar in West Bengal. A BCA degree holder, Pramanik has also worked as an Assistant Teacher in a primary school.

Shantanu Thakur is also a Lok Sabha MP from Bongaon in West Bengal and is serving his first term as an MP. He is a BA degree holder and also has a diploma in hospitality management.

Singh is a Lok Sabha MP from Mirzapur in Uttar Pradesh and has previously served as the Minister of State for Health under Prime Minister Narendra Modi. She has also served as an MLA before.

Dr Pawar is a Lok Sabha MP for Dindori in Maharashtra and is serving her first term as an MP. She has served as a Member of Nashik Zila Parishad and has also worked for the eradication of malnutrition and providing clean drinking water. She was a medical practitioners before joining public life.

Dr. Murugan served as a lawyer at the Madras High Court for 15 years before joining public life. He was also the Vice-Chairman of the National Commission of Scheduled Castes from 2017 to 2020.

Barla is a Lok Sabha MP for Alipurduars in West Bengal and is serving his first term as an MP. He has worked for the rights i tea garden workers and had himself started as a tea garden worker at the age of 14.