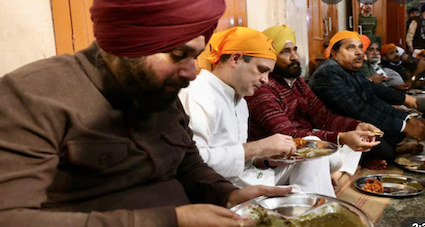 Rahul Gandhi visited Punjab today. And he got a jolt when five out of the eight Congress Lok Sabha MPs boycotted his visit to the State.

Republic TV sought Rahul Gandhi’s reaction on this open revolt but he chose to keep his silence. Same happened when chief minister Charanjit Singh Channi was asked for his reaction on the matter. He was evasive in his replies.

It is learnt that the five MPs could hold a press conference in either Punjab or in the national capital very soon. They reportedly have threatened to quit the party unless Rahul Gandhi gives up his de facto leadership role.

Rahul Gandhi arrived in Amritsar today and paid obeisance at the Golden Temple along with Congress’ 109 candidates for the Punjab elections. He also ate at the langar.

In the 2017 Punjab polls, Congress won 77 out of 117-member House. It’s supposedly closest rival Shiromani Akali Dal could clinch only 18 seats. AAP in fact emerged as the second-best with 20 seats.

Punjab would go to polls on February 20. The counting of votes would happen on March 10.