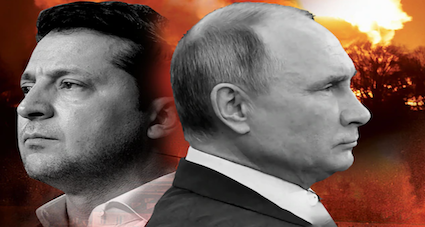 So now we are past 50 days into this Special Military Operation (SMO) and right in between the end of the first phase and the beginning of the second one. So I want to begin by listing a few things which were unclear/ambiguous/misunderstood and which now are becoming clear(er):

Having said all of the above, we now need to step back and only make some very basic predictions:

My first conclusion here is that a direct military conflict involving NATO and Russia is now likely.

That, by itself, is simply horrible, but here is the simple truth: if the Anglos, yet again, want to burn down the European continent there might not be anything Russia could do to prevent that. And forget about the suicidal Eurolemmings. Russia can win that war, and she will, but yet again at a huge cost.

And that is exactly what the Anglos want.

Basically, the EU politicians have now de facto rehabilitated the Third Reich. At least now it is official.

Heck, since that war began, even Uber-Atlantic-Integrationist Medvedev has turned into a patriotic hardliner!

So maybe it will be the “Russian street” which will teach the so-called “specialists” how informational warfare is done? I sure hope so!

The other major power from Zone B, China, immediately understood what this was all about: ”  West’s ban of ‘Z’ symbol a manifestation of its Russophobia“.

Yup, the letter Z is now serving a somewhat similar function to the Star of David in Nazi Germany.

Then there are the many iterations of the following slogans “our cause is just“, “the enemy will be defeated” and “we will go to the end!” which are also all over the Runet. Note that all of these slogans are strongly associated with WWII in the Russian mind.

And then there is this: the, shall we call them “poor communication skills”, of the Kremlin have resulted in a real shitstorm of angry protests and freakouts so the Kremlin had to tone it down by a lot. Yes, Putin PERSONALLY is very popular and trusted (over 80%), but not the government or, even less so, mid-level or local government officials. It would not take much (another major SNAFU for example) to trigger angry protests.

But if anybody is to be truly credited with reassuring the Russian public that no “negotiators” will backstab the Russian military should go to the “Biden” Administration which “convinced” Zelenski to stop any and all negotiations and to restate the Ukronazis most extreme demands (including the LDNR and Crimea). Now that truly made negotiations not only pointless, but pretty much impossible.

I also want to use this opportunity publicly express my deepest gratitude to Josip Borrell, the Eurolemming’s High Representative for Foreign Affairs and Security Policy, for declaring ”  this war must be won on the battlefield“! When EU *diplomats* use that kind of language, it has a quasi-miraculous effect on the wannabe “peace camp” in Russia. Even RT (!) seems to have smelled the coffee and now we can find an article entitled ”  It appears that the West doesn’t want peace in Ukraine“. No kidding, geniuses!

So what is up next?

What about the Black Sea Fleet – can it operate without its flagship?

As I mentioned yesterday, I am not a navy person and neither do I know what plans the Russian General Staff had for the BSF. But I can say this: Slava-class guided missile cruisers were designed in the 70s as aircraft carrier destroyers. For this purpose they were equipped with very powerful missiles, superb (by 1970s standards!) S-300F, OSA-MA SAMs, 6 AK-630 point air defenses and a lot of (old) electronics. Since there are not aircraft carriers in the Black Sea, I suppose that the Moskva main role was as a command ship (its main canons don’t provide the range needed to support amphibious assault operations) and also as a relatively powerful mobile, floating, radar. The Moskva was hit by something about 50km south of Snake Island which means that she was also probably watching the movement of ships near/from Romania. Frankly, that is not a task for a guided missile cruiser.

[Sidebar: as to what actually caused the explosion, my personal best guess is a Ukrainian mine detached by the recent storm and drifting southwards which the Russians failed to detect. That would explain the hull breach which later resulted in the Moskva taking in water and sinking while in tow. I still don’t buy the “Ukrainian 2 “Neptunes” version at all, if only because the Moskva had very solid air defenses while bad weather makes minesweeping very hard. But we will probably never find out for sure, unless the members of the crew reveal what really happened]

Considering that the Ukraine has NO navy at all, I don’t see how the loss of the Moskva would hamper or significantly complicate any BSF operations (navy folks, please correct me here if I missed something!).

The Moskva also had an important role in the eastern Mediterranean (Syria) and yes, there is probably where she will be missed the most. I hope that this loss will provide the impetus to massively accelerate the modernization of old Russian (well, Soviet, really) ships and the construction of new ones.

I would even be inclined to think that the deployment of hypersonic ASM has not only made aircraft carriers obsolete (at least against Russia) but, by the same logic, has made old Russian/Soviet “carrier hunter killers” obsolete by implication. Nowadays, even SMALL missile boats can fire Russian hypersonic missiles thousands of kilometers away, so why bother with really big ships in anti-carrier operations? Range? Okay. Firepower? Okay. Bigger and better sensors? Okay. But not in the Black Sea. And not with a minimally modernized 1970 era ship.

There is no doubt that Russia fought superbly during the SMO and there is no doubt either that the Russian probably calcualted that “just” a SMO would be sufficient to achieve the Russian goals (immediate: protect the LDNR, intermediate: denazify and disarm the Ukraine and long term: change the European and world collective security arrangements) was wrong. It is now becoming almost certain that a real, much larger, war to crush the Ukrainian military will be needed, and it will have to be fought with much larger forces and means.

The Empire of Hate and Lies has decided to “go max” and is acting exactly as it would be in preparations for a much larger war in Europe. For example, with the steady stream of mass expulsions of Russian diplomats there is a very real possibility that Russia and the US/NATO/EU will sever their diplomatic relationships, something traditionally considered as the last step before a declaration of war.

One of the best things the Kremlin could do now is to carefully study how the Iranians since 1979 (!) managed successfully:

If Iran could do that, why can’t Russia? I have an answer for this question, but I won’t offer it until the end of combat operations.

As I have also mentioned many times, Russia is a project, a ‘moving target’, a society which is recovering from at least 300 years of foreign domination (especially spiritual and political) and a society which is STILL changing, very fast in many aspects.

Yes, Russia has a superb military and immense resources. But that is not enough.

Some say that the next “New Russia” was “born in the LDNR”, and I hope that they are right, not in the sense that Russia needs to copy all the decisions (often bad ones too!) of the LDNR, but Russia does need to purge herself from those in positions of power who are just stuck in the past or unable to adapt to new realities.

Can Russia denazify the planet? By herself, no. At most she can militarily destroy all of Zone A, but only in a mutual suicide act of desperation (the US nuclear triad is still mostly functional, in spite of its problems). But can Russia and the rest of Zone B denazify the planet? Absolutely. Even “just” Russia and China together are more powerful than the rest of the planet combined, add India to this and you have a truly unstoppable force.

The Empire is already dead, but like a stinking unburied corpse, it still have enough “toxicity momentum” to continue to threaten the planet until the USA is both denazified and disarmed. That will take a lot of time, even with the recent massive acceleration of the pace of events.

So no quick fix, no quick solution, no quick victory (or defeat for that matter). This is not want Russia wanted, but that is what she got.

May she make the most of it to transform herself into the civilizational realm she was for centuries. That could be the biggest homage to those fighting for the future of Russia today.

(This piece is taken with gratitude from The Saker).