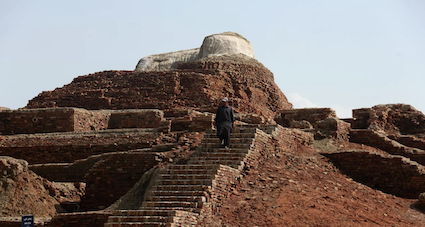 The ancient city of Mohenjo Daro, the best preserved city from the Bronze Age, is located in Pakistan’s southern Sindh province. It was a part of Indus Valley Civilization which existed in South Asia during 7000 BC – 3200 BC.

According to a research paper, The Chronology of Indus Valley Civilization, it was one of the world’s oldest urban civilizations situated in the northwestern region of the Indian subcontinent, and consisting of what is now present-day Pakistan and northwest India.

The civilization spread across the Indus River basin from east to west, north and south over 500,000 square miles, making it the largest known ancient civilization!

It is believed to have had a population of some five million people. One of the most famous and well-preserved cities of this civilization is Mohenjo Daro. The inhabitants of this city were skilled urban planners and traders, as the discoveries made within the city suggests.

They also had a knack for controlling the water of river Indus, and they built wells and a proper drainage system with bathing areas and flushing toilets.

The civilians are believed to have been quite wealthy, as is evident in discovered artifacts such as ivory, lapis, carnelian, and gold beads.

According to a report by National Geographic, “The city thrived for a thousand years, profiting from the fertile lands of the Indus River floodplain and trade with nearby Mesopotamia.”

Then suddenly the city disappeared. What happened to Mohenjo Daro and its inhabitants? Did they die of some mysterious illness or a cataclysmic event? Or did they relocate in haste, leaving all this evidence behind?

Archaeologists indicate that there are no skeletal remains to suggest that tens of thousands of people died at once. There are multiple theories as to what could have happened, but so far nobody has been able to answer these puzzling questions.

Mohenjo Daro means “Mound of the Dead” in Sindhi language. In school books across Pakistan, children are taught about Mohenjo Daro and its importance to South Asia’s history. However, it was not until 1922 that the city was re-discovered and excavated by the British and Indian archaeologists.

For more than 3000 years Mohenjo Daro was just abondoned ruins in southeastern Pakistan and people didn’t know of its historical importance. However, its excavation showed the world that it was quite a huge and technologically-complex city.

For starters, “the layout of the city itself along with its public structures indicate that the Indus Valley Civilization was hugely ahead of its contemporaries (the ancient Egyptians and Mesopotamians, to name a couple) in terms of urban planning and sanitation,” according to Sporcle blog.

It covered over 600 acres and was planned entirely in a grid format, which makes it one of the earliest examples of urban planning and development. The city had many small houses, but it contained a large residential building that, according to archaeologists, could have accommodated over 5,000 people at once.

While many other cities in other parts of the world were protected by a large wall, Mohenjo Daro was surrounded by a cluster of tall guard towers at its borders.

It is however, the city’s sanitation system that has truly awed archaeologists.

According to the blog, the city had more than 400 public wells and the houses contained private wells too. In these houses and public buildings there were flushing toilets and even public baths that were available for people’s use.

Larger houses, which possibly belonged to merchants and traders, had private baths and it is worth noting that all of this was way before Roman baths were invented!

The city had a rich and diverse culture as shown by the cultural artifacts that were found during excavation. Unique sculptures, seals, pottery, gold jewelry, terracotta figures, and different interesting works of art, show that they had an inventive and creative mindset. Their art was said to be extremely realistic and was made with anatomical details, as can be seen in their models of animal figures.

Archaeological excavations further showed that the city had a proper writing system, urban centers, and diversified social and economic systems. At its height of development, Mohenjo Daro could have been home to around 35,000 residents.

What Caused Its Downfall

“Around 1800 BC, signs of a gradual decline of the civilization began to emerge, and by around 1700 BC, most of the cities were abandoned. Today, many scholars believe that the collapse of the Indus Civilization was caused by drought and a decline in trade with Egypt and Mesopotamia,” as stated by the research paper.

Although that is one theory, there are some reports that suggest that immigration by new and hostile civilizations such as Aryans, deforestation, floods, or changes in the course of the river Indus may have contributed to the collapse of the Indus Valley Civilization.

In conversation with Sputnik, urban planner and architect, A.Khalid, shared his theory as to what could have happened to the great city of Mohenjo Daro.

“Collapse of the Indus Valley Civilization and particularly Mohenjo Daro may have been caused by climate change. It would not have been the first time that drastic changes in climate and subsequent extreme weather conditions cause severe detrimental effects, in extreme cases even eradicating entire civilization. Hence, it is highly probable that this change in climate resulted in a flash flood, considering the close proximity of Indus river to Mohenjo Daro. Another possibility: drying of the river or change in its path. All of these factors could have resulted in unfavourable living conditions for the people of the area.”

Following last month’s floods, Pakistan is currently one-third under water. Millions of people have been displaced from their homes and more than 1,300 people have died. The extensive damage is seen in the heritage sites across the country too. The ruins of Mohenjo Daro have been affected as well.

Several big walls which were built nearly 5,000 years ago have collapsed because of the monsoon rains,” Ihsan Ali Abbasi, site curator of the ruins told foreign media in an interview.

With the rising unprecedented nature of climate change-related disasters across the world, it has become crucial to protect these heritage sites before their history is lost forever.

Mohenjo Daro is a UNESCO heritage site, which means there are set guidelines and protocols in place to preserve and protect the fragile area. These are particularly important in times of war and calamity.

Presently, UNESCO has announced $150,000 to aid in recovery and prevention measures at Mohenjo Daro and Thatta world heritage sites, including long-term mitigation of the impact of natural disasters. Further $200,000 will be provided to cultural heritage elements at risk in the province of Balochistan, in the mountaineous city of Swat and southern Larkana districts.

During his two-day trip last week, UN Secretary-General Antonio Guterres paid a visit to Mohenjo Daro together with Pakistan’s Foreign Minister Bilawal Bhutto-Zardari. This was the first-ever visit to the ancient site by a secretary general of the United Nations.

The delegation saw how rain and flood waters seeping into the ground are tilting the walls of the Mohejo Daro’s prehistoric houses, and this alarming development, according to archaeologists, could potentially lead to walls crumbling and collapsing.

Sindh’s Culture Minister, Syed Sardar Shah told local newspaper The Express Tribune, “We have tried our best with the assistance and patronage of UNESCO to keep it conserved and persevered. It is becoming very, very difficult for us now to save the crumbling walls and structures.”

He said that due to limited resources giving to the provincial governments, it is tough to protect the site from the effects of climate change.

According to the newspaper, since August 27, construction workers under the supervision of archaeologists have been working at the site, trying to preserve the original structure from further damage.

How Long Will It Stand

Although over the last decade many institutions have donated money to help preserve the site, unfortunately it has deteriorated greatly since its excavation.

The ruins of Mohenjo Daro are completely unprotected, meaning that anyone can access it.

Back in 2014, one of the largest political parties, Pakistan People’s Party, who Bilawal Bhutto represents, organized a large festival at the historic site, despite being warned that it would gravely affect and possibly ruin the excavation site.

The Sindh Cultural Festival had a stage set up with lights installed, not to mention some 500 guests and an equal number of policemen for their security. All this was taking place on top of the fragile ruins of the great ancient city!

It is not surprising then, that preservation and protection of this area is not being taken seriously and if this continues, Mohenjo Daro could potentially lose its UNESCO status, which will have a detrimental effect on its future.

(This piece is taken with gratitude from Sputnik News)