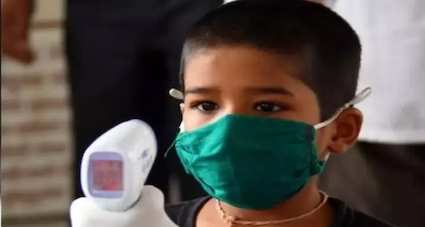 As many as 8,000 children were tested positive in Maharashtra’s Ahmednagar district in the first week of May, confirmed the district chief Rajendra Bhosale.

Maharashtra is already the worst-hit state by Covid-19 and this revelation has triggered alarm in the authorities.

Earlier also, as per the state health ministry official data, there was an increase of 51 per cent in infection among children within a month in the state.

The ministry further informed that more than 75,387 children were infected within 25 days in the state.

Claiming that the state government is working proactively to handle the third wave, Maharashtra MLA Sangram Jagtap said, “During the second wave, there was a shortage of beds and oxygen. So, we need to avoid that during the third wave and hence need to fully prepare ourselves”

Chief Minister Uddhav Thackeray also extended the lockdown in the state till June 15 and mentioned that only places where the positivity rate had dropped below 10 per cent could see relaxations.

Before Maharashtra, Rajasthan also reported a sudden surge in positive cases among children. Over 600 people, predominantly kids below 18 years have been tested positive for the coronavirus in the past 3 weeks in Bharatpur.

In Rajasthan’s Dungarpur also more than 500 children were tested positive last month. The health officials, according to a report, also claimed that there are over 7000 covid-positive children in Rajasthan, majorly asymptomatic.