80% turnout in Bengal and 73% in Assam: Suvendu’s brother attacked 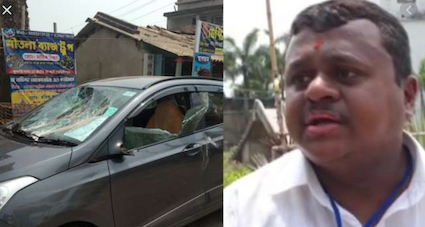 A whopping 80% cast their votes in Bengal while 73% have done the same in Assam as the first phase of polling in these two states ended on Saturday, largely peaceful albeit the customary turbulence in Bengal.

BJP leader Suvendu Adhikari’s younger brother Soumendu Adhikari was attacked in Kanthi by Trinamool Congress, it was alleged by his party. His car was vandalized; his driver was injured in the attack.

Another allegation against Trinamool Congress supporters was levelled by CPI(M) candidate Susanta Ghosh in the Salboni seat of Paschim Medinipur, claiming he was heckled and stones were hurled at his car. Eyewitnesses too corroborated this charge.

“This is an attack on democracy. This is jungle raj going on,” said Ghosh, a former minister in the Left Front government.

Some journalists who were reporting on the attack were also manhandled and their vehicles vandalised.

Three persons have been arrested and a report has been sought from the district administration, said an Election Commission official.

A man, in his mid-30s, was found dead in Keshiary’s Begumpur area in the Paschim Medinipur district in the morning, police said.

He has been identified as Mangal Soren who BJP claims was their supporter. The district administration has denied any connection between his death and polls.

Voters in several areas, including Bhagabanpur in Egra and Midnapore, complained of intimidation to the central forces who provided security and took them to the polling booth.

So far, 107 EVMs have been found to be non-functional, an EC official said. “Forty-seven EVMs have been restored by our sector officers and the rest are being mended,” he said.

Elections are being held in 30 seats, most of which are in the once-Naxal-affected Jungle Mahal region, across five districts amid tight security.

The situation in Assam, meanwhile, was largely peaceful. The BJP is looking for a second straight term in the stage. One of the stalwarts who cast his vote today was chief minister Sarbananda Sonowal who sounded confident to bag at least 100 seats overall. He today offered prayers at the Boga Baba Mazar.

Other parties have a great presence in the media but on the ground they are nothing. Our aim is to form BJP govt again with more than 100 seats. All our candidates will win,” Sonowal said.

In all, 30 seats in Bengal and 47 in Assam voted for the assembly elections on Saturday.

While Bengal has its polls spread in eight phases, the one in Assam are in three phases, the second and final phase of elections being April 1 and 6.