A day after Rahul’s breakfast, Congress and Akali Dal at each other’s throat: Watch 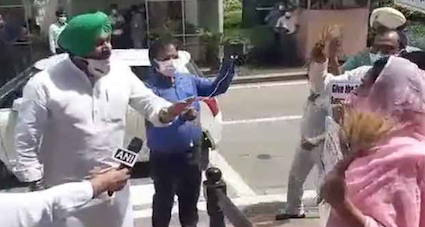 No sooner than the last morsel at the breakfast table,where Congress’ Rahul Gandhi had got 15 opposition parties together, was over, Akali Dal and Congress party leaders went literally at each other’s throat.

“The bill was passed by the Union Cabinet when she was still the minister. You resigned later. They (Akali Dal) continue to indulge in drama,” Congress MP Ravneet Singh Bittu told reporters, hitting out at Harsimrat Kaur Badal.

To this, Harsimrat Kaur Badal replied, “Please ask them… Where was Rahul Gandhi when all that was happening. This party (the Congress) helped in the passage of bills by staging a walkout. They have to stop lying.”

The shouting match between the two leaders was caught on camera.

The Akali Dal has been protesting outside parliament over the controversial laws amid the monsoon session.

When the Congress MP was asked by a reporter if the opposition doesn’t stand united against the government, he said: “What unity. They (Akali Dal) have got the bills passed. It’s been five days… please ask them where is their party chief – Sukbhir Singh Badal?”

The argument was in sharp contrast to the photos from Tuesday’s breakfast meeting, discussing parliament strategy amid disruptions over several issues, including farm laws, Pegasus snooping.