A marginalized Farooq is whistling in the dark; Anti-India rant won’t take him anywhere 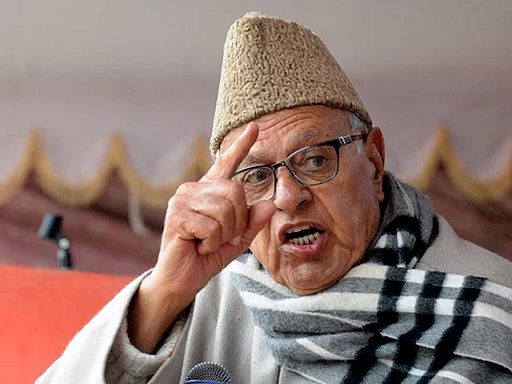 Suddenly, petty minions of the NC of Abdullahs started behaving like pelipotentates full of vain air. They started saying here and there that after jettisoning PDP, the only and obvious choice for the Centre was the NC. Logically, at that time, they made lot of sense and it seemed that NC will return to power in the state of Jammu and Kashmir with a vengeance.

The state of J&K ceased to exist on October 31, 2019, and the foundations for total marginalisation of the NC was started a couple of months before that. To be exact, on August 5, 2019, when Article 35-A was scrapped and 370 restated in a manner that it became redundant.

The NC was at its wit’s ends as it could not imagined a day without either of these articles. The incarceration of most senior leaders, some under provisions of Public Safety Act (PSA) was a huge setback. Incidentally, PSA was something that was first applied in J&K during Sheikh Mohammad Abdullah’s rule in 1978, to target and fix those who vandalised forests.

Farooq made two statements in the past couple of days, apparently to muster support among ordinary Kashmiris. First, he made a statement that there could be “no peace in Kashmir without 370”. He also said that Kashmiris would prefer to be ruled by the Chinese, rather than Indians.

The senior Abdullah seems to have drawn inspiration from his father Sheikh in adopting an anti-India stance when out of power. This was a ploy which returned Sheikh to power after 22 years. It may be recalled here that Sheikh’s second in command Mirza Afzal Beg launched Plebiscite Front (PF) demanding self-determination for Kashmiris after Sheikh was dismissed in August 1953.

From 1947 to August 1953, neither Sheikh nor Beg talked of holding plebiscite in J&K, content as they seemed in holding all the levers of power. Their utterances changed radically once they were out of power, and they jettisoned the plebiscite demand equally abruptly when Sheikh became the CM again. This had happened after what is known as Beg-Parthasarthi Accord in 1975.

Talking of the Chinese, and the way they have been treating Uyghur Muslims in re-education camps, Farooq can perhaps thank his stars that no such camps are run by Delhi. If he is so keen to co-habit with the Hans that define China of today, he can perhaps visit China on a visa and stay with Uighwith Uyghur in one of these camps.

The fact of the matter is that Sheikh Mohammad Abdullah had started his career as a government teacher. Sheikh, his son Farooq Abdullah and grandson Omar Abdullah remained Chief Minister of the state. However, none of them was ever a leading businessmen or had any other visible means of income.

Despite that, it is believed that the Abdullahs today own property worth thousands of crores of rupees. This fact was pointed out by Sajad Lone of People’s Conference and Imran Reza Ansari two years ago. Taking potshots at Abdullahs, Lone and Ansari had asked them to explain their source/s of wealth to the Kashmiris.

Instead of responding to this heckling, the Abdullahs had chosen to duck for cover and preferred to remain silent. This seems to have created a flutter in Kashmir politics for some months as PC expanded with several former PDP legislators joining it.

The hatchet between the Lone-Ansari duo and the Abdullahs was buried later as Farooq positioned himself as senior statesman and politician in Kashmir on the eve of scrapping of 35-A. It is significant that Farooq’s recent statements have not drawn any support from other politicians in Kashmir. As a Lok Sabha MP, perhaps he stands better chances of getting away with such utterances for which PSA could be a strong deterrent for others.