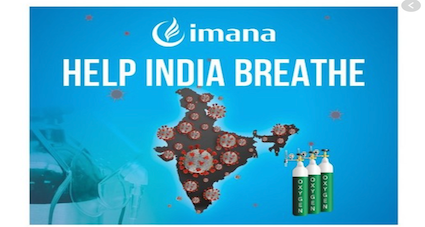 ISMANA (Islamic Medical Association of North America) is run by Dr Ismail Mehr, a Pakistan-based doctor. The organization has been leading a project- ‘Help India Breathe’ campaign on Instagram since April 27, 2021. While the initial target for donation was set at Rs.1.8 crores, it was later changed to 5.62 crores.

It is important to note that IMANA has no office, brand, or any representative in India but it still managed to raise a fund of a whopping amount of Rs. 8.7 Crore.

Besides this, there were other campaigns also on different crowdfunding platforms through which IMANA managed to raise approximately Rs. 2 crore. IMANA chairman also claimed that after May 7 they received donations worth of $100K per hour, making the total amount as per calculations could be anywhere between US$ 4.12 million to US$21 million (Rs. 30 crores- 158 crores).

However, DisInfo Lab in their report claimed that instead of sending the ‘help’ to India, the organization sent only a small amount and with zero transparency “there is no way to ascertain actual amount it might have received.”

DisInfo Labs also stated that IMANA made several dubious claims including that they had tied up with DRDO and the Ministry of Agriculture for coordinating their help in India however none of them can be verified.

According to IMANA 2020 Annual Report, they provided ‘help’ to Pakistan through Al-Mustafa Welfare Trust (AMT), part of Pakistani military.

It is worth noting that IMANA was not the only organisation running fundraisers in the name of helping India, there were 66 other organizations also involved in the same activity.

“Some of the major organisations that have collected funds on Launch Good include- ICNA Relief Canada, Human Concern International (Canada), Helping Hand for Relief and Development (HHRD), and Islamic Relief UK,” the report said.