A `Pakistani’ in fray in DDC polls in J&K: Why her legitimacy story has too many holes 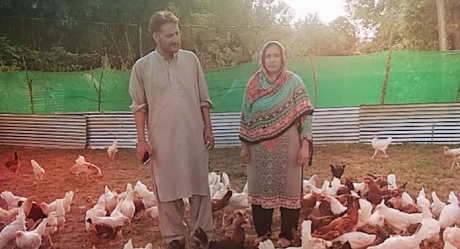 One of the District Development Council (DDC) segments going to polls in the fourth round is Drugmulla in Kupwara district. This segment is in the eye of a storm as an independent candidate, Samia Sadaf is Pakistani by birth. NewsBred had reported it on Sunday.

Sadaf had entered India illegally through Nepal with her husband, Abdul Majeed Bhat, in 2010, in response to “rehabilitation policy announced by the Omar Abdullah government”. Her husband was arrested, remained in custody for some time and then let off.

She apparently was not put in custody, despite being an illegal entrant who first entered India, and then reached Kupwara in Kashmir. She is now contesting the DDC polls for which she can be eligible only if she has acquired Indian citizenship through legitimate means. LEGITIMATE is the operative word here for there is no legitimate manner prescribed and evolved by the government of India to confer citizenship in such cases.

This rehabilitation policy, which she claims to have benefited from, was finalized by Govt Order No 1376 (ISA) of 23-10-2010. It was said to be a “Policy for return of ex-militants to the State” (read Jammu and Kashmir). It is a 20-page policy document available on the Net and explains the formalities required to be completed by the returnees and their dependents. It clearly states that “the policy is intended to facilitate the return of ex-militants who belong to J&K” State.

A high- powered committee comprising top officials like Financial Commissioner (Home), DGP, ADGP (CID), Principal Secretary of Law Department, Zonal IGPs and Joint Secretary (K) of Ministry of Home Affairs (MHA) was constituted under this policy for overall supervision and vetting. Point no 5 of this order deals with the constitution of the committee.

Point no 6, 7 and 8 of this GO 1376 elaborate on other details. Point no (6) All such former militants permitted to return under the proposed policy would be permitted to enter through JCP Wagah, Attari or through Salamabad or Chakan da Bagh crossings on the LoC or through the Indira Gandhi International Airport, New Delhi.

The next point reads (7) After completion of the formalities at the crossing points, the returnees and their dependents will be escorted to the State of J&K and the District authorities will be duly informed. A record of their entry in India and to J&K will be maintained by the Immigration authorities at the crossing points by the J&K CID, respectively.

Point no 8 deals with the dependents of former militants and it says. (8) The wives, children and other dependents of those returnees who have married in PoK/Pakistan during the period 01.01.1989 to 31.12.2009 will be considered for entry into the country as per the existing laws of the land and the necessary certificate for the entry will be issued to them.

Sadaf did not enter India legally or legitimately as prescribed under points (6) and (8) of the policy. As such, the question of issuance of “necessary certificate for the entry” did not arise. By what legitimate process was she conferred Indian citizenship and issued an Indian passport? Her husband said she was issued an “Indian passport for three years which has expired now and we didn’t apply again”.

That too seems rather intriguing for the Indian passports are usually issued for five years or 10 years in normal circumstances. It needs to be pointed out here that there are too many dots which do not connect in her case. A very similar case was reported during the Lok Sabha elections of 2004 by the author. It pertained to a man named Zulfikar Ali Rahat of Salwa village of Mendhar in Poonch.

Zulfikar wanted to contest from Jammu LS segment and was given a ticket by Janata Party faction of former Prime Minister Chandrashekhar. On closer scrutiny of the relevant records, it was found out that he had entered India along with his father on a Pakistani passport and stayed on after the expiry of the visa term.

Returning officer Naveen Chaudhary, IAS, then placed as Deputy Commissioner of Jammu had then cancelled the nomination papers of Zulfikar. Most members of his family continue to live in India till date, decades after entering legally, staying on illegally, but that has not made them eligible for conferment of the Indian citizenship. Interestingly, Sadaf was praised by Prime Minister Narendra Modi himself in a brief interaction via video link when the issue of entrepreneurship was being discussed. However, it must be said that Modi wouldn’t have know if Sadaf was a legal or illegal citizen of India.

How does that confer eligibility on her for getting the Indian citizenship? If indeed there is a legitimate process she followed to acquire it, hundreds of other “Pakistani brides” who came to India, via Nepal, as wives of former militants did, can also follow the same route.

That is no rocket science.