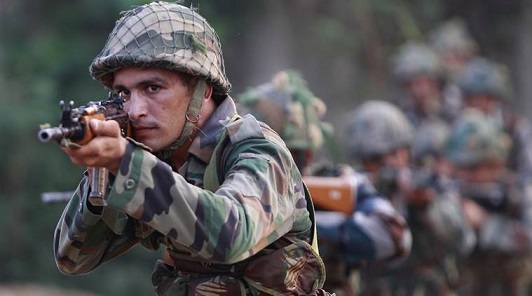 With one eye on the enemy at border, and the other at misinformation being spread at home, the Indian Army today made a stunning public rebuttal on the “malicious and unsubstantiated accusations in some quarters” this afternoon.

The public stirring of Indian Army is seen as a rare response to rein in accusations being spread on social media, notably by two sources which belong to Congress party.

The first one was by Congress media panelist Abhishek Dutt on twitter where he doubted if it was even the army hospital that prime minister Narendra Modi visited in Leh. Dutt has made circles on images from prime minister’s visit, stating “neither there are drips, photographers instead of doctors, no medicine near bedside, no water bottle…”

A similar tweet was done by the Madhya Pradesh unit of the Congress party which read: “Fake Hospital, Fake Purpose, Fake 56 inch…” The tweet has subsequently been deleted.

Indian Army in response has made a stunning riposte in a press release.

“There have been malicious and unsubstantiated accusations in some quarters regarding the status of the facility visited by the Prime Minister Shri Narendra Modi during his visit to the General Hospital at Leh on July 03, 2020.

“It is unfortunate that aspersions are being cast on how our brave Armed Forces are treated. The Armed Forces give the best possible treatment to their personnel.

“It is clarified that the said facility is part of the Crisis Expansion capacity of 100 beds and is very much part of the General Hospital complex.

“The COVID-19 protocol had necessitated some wards of the General Hospital to be converted into isolation facilities. Hence, this hall which otherwise was normally used as a Training Audio Video Hall was converted into a ward ever since the hospital was also designated as COVID treatment hospital.

“The injured braves have been kept there since their arrival from Galwan to ensure quarantine from COVID areas. The Chief of Army Staff General M M Naravane and the Army Commander have also visited the injured braves in the same location.”

This has followed the “fake video” tweeted by Congress leader Rahul Gandhi has been severely criticized in media on the border flare-up.