A winter like none before on India’s icy borders: All hands are on the deck 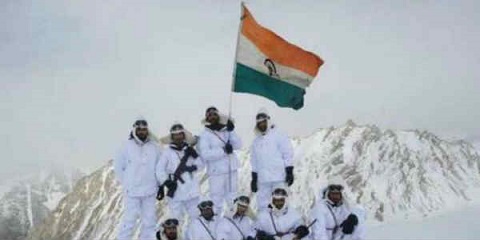 The dawn of Diwali on Saturday also heralded the onset of winter months in most parts of the northern India. The sun played truant till mid-day and even if it was visible at some places, the warmth was missing. Perhaps as it was overcast in many areas and upper reaches of hills witnessed slight drizzles.

The morning hours as also late evenings were a bit cold but clear sun ensured that the day temperature was pleasant. At most places, in plains of Jammu & Kashmir, neighbouring Punjab, Haryana and National Capital Region (NCR), clear sunny days meant heavy woollens were still in boxes.

It all changed in the early hours today as the absence of sun above could be felt as one walked around. The hunt for thermal innerwear, sweaters, jackets and shawls started in right earnest. The weather forecast for Diwali and a couple of days later, till Monday evening, predicted rain and temperatures going under 10 degrees Celsius in many places.

Amid it all, one heartening bit of news was that the Srinagar-Kargil-Leh road is likely to be kept open this year for most of the time. Till last year, the closure of this road, mainly due to heavy snow witnessed in Zojila area was a regular feature during winters. For four months or five, the road remained closed from mid-November to April-end or beginning of May.

The Chinese aggression in Ladakh region has made it imperative to keep the road going for as long as possible. Incidentally, buffer stocking of rations, fuel and other goods is done in the Ladakh region, both in Kargil and Leh districts, during the summer months. Due to repeated disruptions, that was affected in some measure.

Lieutenant Governor of Ladakh R K Mathur recently held a meeting to review the status of Zojila road and winter stocking. Later, officials of Beacon were asked to keep its men and machinery ready to clear snow. The supply of essential goods to Ladakh, including grains and petroleum products, is being given top priority.

Ladakh region is likely to remain connected to other parts of the country during winters this year via Himachal Pradesh also. This has become possible because of the opening of Atal Rohtang Tunnel on the Manali-Leh road. Border Road Organization (BRO) will keep men and machinery deployed on this stretch during winters also.

In the past, garrison at Leh and nearby areas was supplied goods during winters aerially as IL-76 and other aircraft did sorties on most days. This time, however, efforts are being made to keep Ladakh connected to mainland through Srinagar-Jozila-Kargil-Leh and Manali-Leh roads also. The prevailing war-like situation has made it imperative to keep these roads open with more troops likely to spend winter months there.

Weather forecast predictions and advisories issued by the Metrological Department will become critical in the coming days. These will be vital for deployment of men and machinery needed for snow clearance operations. According to Beacon officials, their efforts can translate into minimal closure of the road in the winters.

That can be a tough challenge, but as they say, when the things get tough, the tough get going. It may be recalled that during November 1947 also, the Indian Army had moved to Ladakh via Zojila to take on the Pakistanis. This time, the troops are bracing up, ready to foil any misadventures by the Chinese.