Aamir Khan is all praise for movie The Kashmir Files 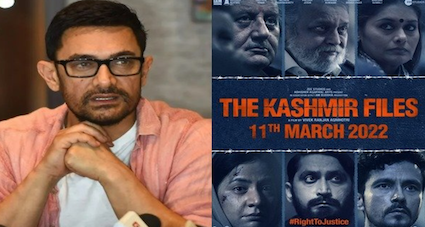 Actor Aamir Khan is all praise for The Kashmir Files and its director Vivek Agnihotri.

While interacting with the press in the Capital yesterday, for the upcoming Telugu film RRR, Aamir praised the movie which has become a rage. Said Aamir:  “I would definitely watch the film. It is a part of history that breaks our hearts. Whatever happened to the Kashmiri Pandits, it is condemnable.”

He further added, “Any film made on such topic must be seen by all Indians. It has touched the emotions of all the people who believe in humanity, and this is a beautiful aspect of the film. I will definitely watch it, and I am delighted to see the film is successful at the box office.”

The Kashmir Files is based on the exodus of the Kashmiri Pandits from the Valley in the 1990s. Several states have made it tax-free. From prime minister Narendra Modi to home minister Amit Shah to UP’s chief minister Yogi Adityanath have praised the movie.