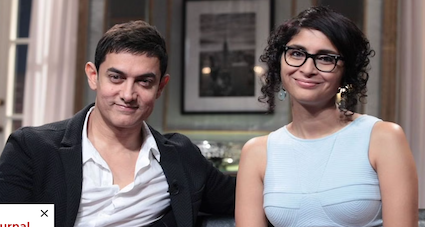 Bollywood actor Aamir Khan has released an official statement announcing his divorce with wife Kiran Rao. The couple has been married for 15 years now and has a son Azad Rao Khan. The couple released a joint statement and said that they will co-parent their son, Azad Rao Khan, as well as continue with their professional partnership on Paani Foundation and ‘other projects that (they) feel passionate about’.

“In these 15 beautiful years together we have shared a lifetime of experiences, joy and laughter, and our relationship has only grown in trust, respect and love. Now we would like to begin a new chapter in our lives – no longer as husband and wife, but as co-parents and family for each other,” a statement read.

It further read, “We began a planned separation some time ago, and now feel comfortable to formalize this arrangement, of living separately yet sharing our lives the way an extended family does.

Aamir Khan and Kiran Rao met on the sets of Lagaan where Rao was an Assistant Director. After spending some time together, they tied the knot on December 28, 2005. Aamir was earlier married to Reena Dutta but got divorced after 16 years of marriage in 2002.

Elon Musk has unveiled the 'Twitter Files' on the microblogging site on Saturday. Musk tweeted a link to the account of independent journalist Matt Taibbi,...