Aamir Khan on divorcing Kiran Rao: And on the said girl in the background 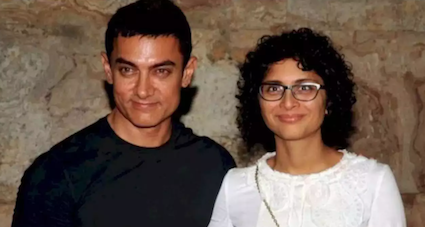 After their separation, rumours started doing rounds that Aamir and Kiran got divorced because the former was having an affair. The Laal Singh Chaddha actor during a recent interview clarified the reason behind his divorce with Kiran Rao.

Aamir Khan tied the knot with Kiran Rao back in 2005. The actor revealed during his conversation with News18 that Kiran told him several years back that he was not interested in his family. Aamir was quoted saying by the publication, “She would tell me that even when we discuss something as a family, I’m always lost somewhere. She said I’m a different kind of person. She very sweetly said, ‘I don’t want you to change because if you change then you wouldn’t be the same person who I fell in love with.’ I’m in love with your brain and your personality. So, I would never want that you change. But today when I reflect on what Kiran told me seven years ago, I would say that I have seen a lot of changes in me in the past 6-7 months.”

Talking about how he is going to take this relationship forward with Kiran Rao while co-parenting their son, Aamir added, “Actually, Kiran and I realised that we like each other so much and consider one another family in the truest sense. Kiran and I are actually families. But our relationship of husband and wife experienced a certain change and we wanted to respect the institution of marriage. However, we are always going to be by each other’s side. We are working together. We live close by. But we are no longer husband and wife and that’s why we decided to call it quits.”

Further clarifying his reason for getting divorced both with Kiran, Aamir Khan said that there was no one involved behind their separation. He also disclosed that he was not even in a relationship with Kiran while getting divorced from Reena Dutta. Aamir said, “There was no one back then, there is no one now.” “A lot of people think that Kiran and I met before my divorce from Reena but it’s not true. Kiran and I had met but we didn’t really know each other and we became friends much later”, he added.

After being together for more than 15 years, the couple announced separation in a joint statement that read, “In these 15 beautiful years together we have shared a lifetime of experiences, joy and laughter, and our relationship has only grown in trust, respect and love. Now we would like to begin a new chapter in our lives – no longer as husband and wife, but as co-parents and family for each other.”

Speaking about his upcoming projects, Aamir Khan will be next seen in a lead role in Laal Singh Chaddha which co-stars Kareena Kapoor as the female lead. The movie is slated to release on August 11, 2022.