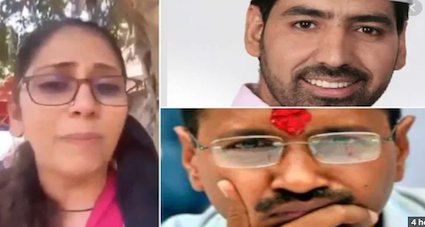 The Delhi police have registered an FIR against Aam Aadmi Party (AAP) councillor from Matiala ward, Ramesh Matiala, for allegedly misbehaving with a party worker and assaulting her.

The police would be calling the woman in the coming days to record her statement before the magistrate, under Section 164 of CrPC, before making any arrests.

The action was taken after a female member of the AAP party alleged that Ramesh Matiala asked two party workers to slap her.

This is HOW Women are treated in AAP – Listen to this Lady who had organized covid testing camp & her allegations against Ramesh Matiala of Aam Aadmi Party who allegedly got her slÐ°Ñ€Ñ€ed by party workers. “I want to ask Arvind Kejriwal WHY women are NOT SAFE in your Party??” pic.twitter.com/lkDWsvyZv6

A video is doing rounds on social media where the same lady can be heard narrating the event. She informed that she organised an RT-PCR test camp in her area with the help of the Delhi government and banners with her picture were also placed for the same. However, Matiala didn’t like it and got infuriated and asked two other female workers to slap her in front of him.

Additional Deputy Commissioner of Police (Dwarka) Shankar Chaudhary confirmed the FIR had been registered on the charges of causing hurt, wrongful restraint, criminal intimidation, and insult to modesty of a woman.