Abdullahs, Mehbooba know in heart that J & K of old is gone forever 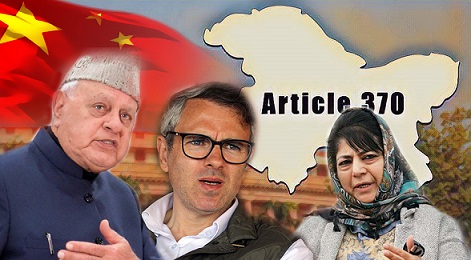 It took Sheikh Mohammad Abdullah 22 years to learn that participation in elections was the real test of popularity of any leader or his party. Fortunately, leaders of People’s Alliance for Gupkar Declaration (PAGD) have learnt that lesson in only a month, Jammu and Kashmir Apni Party chief Altaf Bukhari said in Srinagar on Thursday.

He was commenting on the participation of PAGD constituents in the forthcoming District Development Committees (DDCs) elections. When the PAGD was constituted on October 15, some leaders had given the impression that elections had no meaning till “special status” of Jammu and Kashmir was restored.

Apni Party, formed by coming together of many former PDP legislators, including MLAs and MLCs, has been ambivalent in its stance on these changes. That is the prime reason due to which it is often portrayed as kowtowing to the government. Some leaders of the PAGD had also mocked it for its stance and accused it of siding with the BJP.

The “22 year versus 1 month” taunt cuts deep as Sheikh Mohammad Abdullah was dismissed on August 9, 1953. The Congress, under Indira Gandhi, had brought him back to power in 1975. He was made the Chief Minister but ruled with the help of over 50 Congress MLAs. His own party, NC, did not have any legislators in the state assembly.

Sheikh had thus taken 22 years to give up his demand for plebiscite. His right hand man, Mirza Afzal Beg, had created Plebiscite Front to keep Sheikh relevant in Kashmir politics. However, Beg was later dumped by Sheikh and accused of betrayal. For several decades, Beg had remained number 2 after Sheikh and was responsible for drafting many legislations which were response for NC’s popularity.

Compared to late Sheikh, his son Farooq Abdullah and grandson Omar Abdullah are keen on participation in elections within a month of issuing statements against changes of August 5. Implied in this taunt is the fact that Sheikh had talked of restoration of pre-1953 status for many years but forgot all about it when he got power.

The present crop of leadership in Kashmir also talks of restoration of pre-August 5, 2019, but its resolve to stay away from any elections has lasted less than a month actually. This only means they have already accepted the bitter reality that they cannot do anything much towards restoration of special status of J&K. Even if they dial up the Chinese Communist Party (CCP), be that as it may.