Abdullahs, Mufti’”all Gupkaris–catch the bus for DDC elections; Article 370-35A can wait 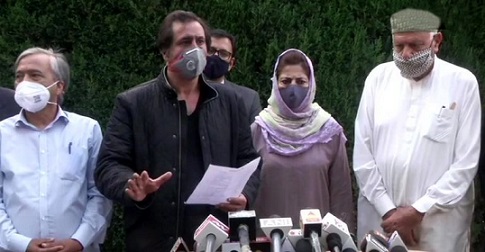 NC leaders Farooq Abdullah, his son Omar Abdullah, Mehbooba Mufti, Yusuf Tarigami, Sajad Lone and Muzaffar Shah are presently in Jammu to hold discussions with local leaders. Mehbooba Mufti had made some unsavoury remarks about the national flag in Srinagar after her release at a press conference.

This had led to a strong reaction and T S Bajwa, Ved Mahajan and H A Waffa, all three PDP leaders from Jammu, had quit the party in protest. Zulfikar Ali, a Gujjar leader who was Cabinet minister in Mehbooba’s government once, had left the party much earlier. The PDP stands virtually decimated both in Jammu and Kashmir regions because of the exodus of several party leaders.

In contrast, the NC led by Abdullahs has its cadres intact. Despite challenges, no leader or workers have left it to join any other party. Some important PDP leaders are now a part of Sajad Lone’s PC.

Mehbooba had remained ambivalent about participation in any elections in the Union Territory (UT) of Jammu and Kashmir during that presser. This had given rise to speculation that Valley based parties may boycott any future elections in J&K.

The decision by PAGD leaders regarding DDC elections indicates that the NC cadre may get a lion’s share of seats. The marginalisation of an emaciated PDP is also likely as other parties have more former MLAs and MLCs among their ranks than it.

After the last assembly elections, the PDP had emerged as the largest party winning 28 out of 87 seats. Two-thirds of these legislators are no longer with the party as they made a beeline for NC and PC over the last two years.

Interestingly, Farooq Abdullah had announced on Friday that restored of Article 35A, and return of 370 in its original form were the agenda points of his party. Other alliance parties have also come together to pursue the restoration of these articles.

Meanwhile, several activists and commentators in Jammu have called PAGD lesders as “Gupkaris” and “Gupkar Gang” on different social media platforms. Mocking Gupkaris, they said that the tone and tenor of these leaders changes, and so does their diction, once they are in Jammu. In Srinagar, these leaders adopt a much aggressive posture, they pointed out.

The youth wing of Ikkjutt Jammu, a socio-political organisation, emerging as a political party in Jammu, held protests against Gupkaris. Ikkjutt chairman advocate Ankur Sharma alleged these leaders were here in Jammu to vitiate the political atmosphere here.