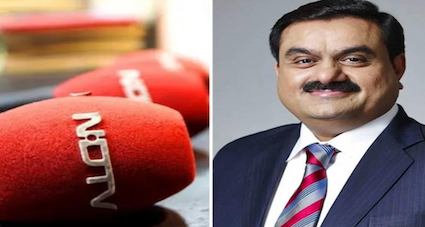 The Adani Group announced today that its media arm would purchase a 29.18 per cent stake in New Delhi Television Ltd (NDTV), and make an open offer to acquire another 26 per cent of the shares in the media giant.

The acquisition of a 29.18 per cent stake will be indirect and made through Vishvapradhan Commercial Pvt Ltd (VCPL), a wholly owned subsidiary of AMG Media Network Ltd (AMNL), which is owned by Adani Enterprises Ltd (AEL).

“AMNL’s wholly owned subsidiary VCPL holds warrants of RRPR Holding Private Limited (RRPR) entitling it to convert them into a 99.99% stake in RRPR. VCPL has exercised warrants to acquire a 99.5% stake in RRPR. Such acquisition will result in VCPL acquiring control of RRPR,” the media release said.

This will trigger an open offer to acquire up to a 26 per cent stake in NDTV in terms of SEBI’s takeover regulations, the organisation said.

“RRPR is a promoter group company of NDTV (NDTV. BSE: 532529) and holds a 29.18% stake in NDTV. VCPL along with AMNL & AEL (persons acting in concert), will launch an open offer to acquire up to 26% stake in NDTV, in compliance with the requirements of the SEBI’s (Substantial Acquisition of Shares and Takeovers) Regulations, 2011,” the release said.

NDTV has three national news channels –NDTV 24×7, NDTV India and NDTV Profit, besides having a strong online presence. The company recorded a revenue of Rs 421 crore in the financial year 2022, with an EBITDA of Rs 123 crore and a Net Profit of Rs 85 crore during the fiscal year.

“AMNL seeks to empower Indian citizens, consumers and those interested in India, with information and knowledge. With its leading position in news and its strong and diverse reach across genres and geographies, NDTV is the most suitable broadcast and digital platform to deliver on our vision,” the statement added.