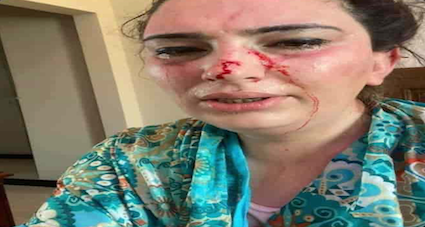 In a dastardly act, the daughter of Afghanistan’s ambassador to Pakistan was abducted and released, allegedly by Talibans, but not before torturing and subjecting her to violence.

Silsila Alikhil, daughter of ambassador Najibullah Alikhil, was abducted in Islamabad on July 16, at around 1.45 p.m and released at 7 p.m on the same day, some five hours later.

Her medical examination show Silsila to have pain and swelling at wrist joints and hands, there were marks of ropes on the wrist joints. She also had marks on her legs and ankles. Her eyes had swelled after beating and she was vomitting and bleeding from the ENT region.

Silsila had been abducted from the Jinnah Super in Islamabad and after being torturened, she was released near Tehzeeb Bakery in the Blue Area of city.

This marks a new low in Pakistan-Afghanistan relations. Talibans have captured a crucial border crossing with Pakistan and the latter, as per the vice-president of Afghanistan, is not allowing Afghan armed forces to attempt and recover the lost territories from the Taliban.

Afghan president Ashraf Ghani and Pakistan’s PM Imran Khan exchanged verbal barbs at an international conference in Tashkent, Uzbekistan yesterday. Ghani claimed that Pakistan was not severing its ties with terror groups and that some 10,000 jihadi fighters had Afghanistan last month.