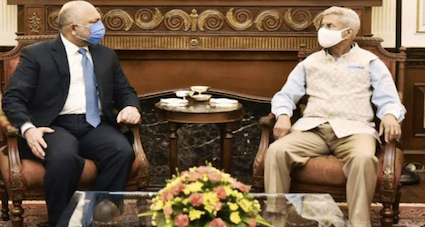 India had assumed the presidency of the UNSC for August and is set to organise key events in three major areas of maritime security, peacekeeping and counter-terrorism.

Also as India has been a major stakeholder in the peace and stability of Afghanistan, Atmar proposed that a special UNSC meeting be held with a focus on the immediate cessation of violence in Afghanistan.

Taking to Twitter, the Afghan Foreign Ministry informed that Atmar called Jaishankar amid growing atrocities of Taliban in Afghanistan and described the Taliban’s attacks in “collusion with foreign fighters and terrorist groups” as a violation of international law and talked about their possible consequences on the region’s stability and security.

This came amid heavy clashes between Afghanistan forces and the Taliban in several Afghan cities, including Herat, Kandahar, and Helmand. In the past few weeks, Afghanistan has witnessed a surge in violence as the Taliban has intensified their offensive against civilians and Afghan security forces with the complete pullback of foreign forces just a few weeks away.

Meanwhile, the two foreign ministers met for the second time after July this year. Last month also,  during meetings of the Shanghai Cooperation Organization (SCO) Council of Foreign Ministers, Jaishankar met Atmar and discussed about the growing global concerns over Taliban fighters rapidly seizing control of areas in Afghanistan.