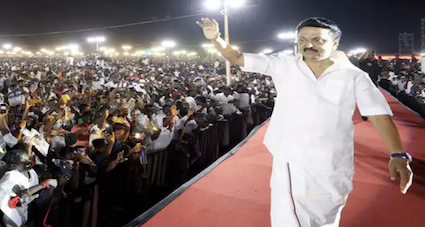 The Dravida Munnetra Kazhagam (DMK) seems to be making vile comments daily. After making derogatory remarks about the mother of chief minister and AIADMK’s E. Palaniswami, the DMK has this time targeted Pon Radhakrishnan, BJP’s candidate from Kanyakumari

The DMK supremo MK Stalin said instead of “Pon”, Radhakrishnan is “Poi” (lies).

Meanwhile the Election Commission has issued a notice to DMK leader and former Union minister A Raja for his derogatory remarks against CM E. Palaniswami. He has been asked to explain his remarks by 6 pm on Wednesday.

Based on ground reports, the Commission said, it is of the view that the “contents of the speech made by you are not only derogatory but also obscene and lower the dignity of motherhood of women, which seems to be a serious violation of the provisions of Model Code of Conduct”.

Raja had stirred a controversy when he claimed that the chief minister was borne out of an ‘illicit representation’ compared to Stalin, who was born from a ‘legitimate relation’.