After Jitin Prasada, is it Sachin Pilot next? Unhappy as he is with Congress 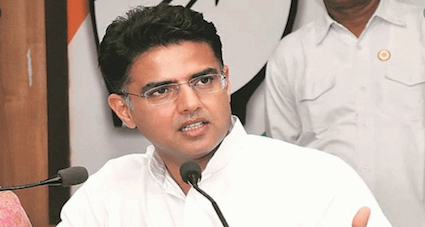 With Jitin Prasada’s exit, the internal political crisis within the Congress party has once again come to the fore and Sachin Pilot has just added insult to injury with his remarks.

Talking to the Hindustan Times, Rajasthan deputy chief minister Sachin Pilot expressed his dissatisfaction on Monday and reminded his party that the issue which he brought almost 10 months ago, hasn’t been solved yet.

Pilot has indicated that if the party will not be able to find the solution within a month’s time,  a divide is imminent

“It has now been 10 months. I was given to understand that there would be swift action by the committee, but now half of the term is done, and those issues haven’t been resolved. It is unfortunate that so many of the party workers who worked and gave their all for getting us the mandate are not being heard,” said Pilot.

Ved Prakash Solanki, Pilot camp legislator also lamented that no action had been taken by the party yet. “Sachin Pilot had given a statement a lot of time has elapsed. The question is not about me, Sachin Pilot, or a third person. A long time has passed but the Cabinet expansion hasn’t taken place.”

Last year, Pilot and 18 of his loyalists revolted against Rajasthan chief minister Ashok Gehlot, left Jaipur, and camped in Haryana after Pilot was summoned for attempting to topple the government.

“A three-member committee” was formed to address the issues raised by Pilot however the demands are still pending after one of its members, Ahmed Patel died of Covid in November last year.

Meanwhile, responding to Pilot, Congress spokesperson Supriya Srinate mentioned that “There has to be a turnaround time. Sachin Pilot has to be patient.”

The unnamed senior Congress leader also made it clear that “Just like Pilot may have been promised that his grievances will be heard, the independent legislators [who helped Gehlot during floor test]  were also promised they would be accommodated if they supported the Congress. This cannot be ignored,” making the rift between CM Gehlot and Pilot grow widened.