After phone-tapping surfaces in Rajasthan, Pilot asked to consider his future in Congress 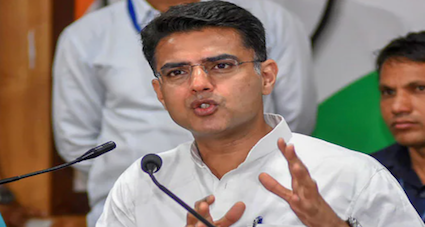 Reminding Pilot how he was labelled a “traitor”, Shekhawat asked the young Congress leader, often at loggerheads with the State chief minister Ashok Gehlot, to do the corrective.

A Pilot-camp MLA Ved Prakash Solanki has claimed that phones of some MLAs were being tapped by the state government.

Pilot, on his part, has been crying aloud that he’s being sidelined and his issues have not been taken up by Congress.

“I got to know that some Congress MLAs are complaining to CM that their phones are being tapped. Now the high command should come ahead and give an explanation. Everyone knows what Pilot was called last time, this time I feel even Pilot has decided what he needs to do now. Last year, the CM said that it doesn’t happen in Rajasthan but his minister admitted in Assembly that phones were tapped legally,” said Shekhawat.

On Saturday, Congress MLA Ved Prakash Solanki said: “Two-three MLAs have brought the matter to the notice of the Chief Minister. They have highlighted in front of the CM that the phones of the MLAs are being tapped, and they are being threatened. They have added that they fear their houses will be raided or if not that, then they would be framed in some other matter, and to avoid that they are contemplating leaving,” said Solanki.

In March, the Ashok Gehlot government admitted to tapping phones of MLAs, eight months after the phone-tapping scandal rocked the Rajasthan government.  The official reply states, “In the interest of public safety or public order, and to prevent the occurrence of a crime which might risk public safety or public order, telephones are intercepted after approval by a competent officer under Indian Telegraph Act. Telephone interception has been done by the Rajasthan Police after obtaining permission from the competent officer”.

While Congress demanded a case be lodged against Shekhawat, BJP questioned the authority of the state government to ‘bug’ their own MLAs, raising claims on its legality.

While CM Ashok Gehlot had denied tapping his MLAs, the SOG arrested an individual named Sanjay Jain alias Sanjay Baradia for his involvement in ‘horse-trading’ based on leaked tapes.

It had also issued notice to Pilot in connection with the alleged involvement of BJP leaders for toppling the state government – with BJP members hinting that Pilot was reportedly in touch with the BJP camp to become the CM – which had led to his failed rebellion.