After UP, Haryana and MP to make “national anthem” mandatory for Madrasas 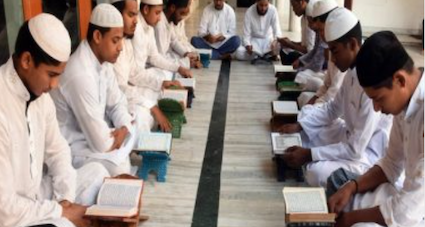 After Uttar Pradesh, Haryana and Madhya Pradesh governments hint to make it mandatory for all students and teachers in Madrasas of the state to sing the National Anthem before commencing classes. Agreeing on singing the National Anthem as a ‘good activity’, both Haryana education minister Kanwar Pal Gujjar and MP Home Minister Narottam Mishra have expressed intentions of making it mandatory to sing in the Madrasa.

Haryana education minister Kanwar Pal Gujjar said, ‘The state govt will take an update from Madrasa if they were not singing, govt will make it mandatory national anthem in Madrasa”.

“We will take the stock of this issue as singing the national anthem in schools is a good activity”, he added.

The Registrar of the Uttar Pradesh Madrasa Education Board, SN Pandey issued an order stating that from Thursday, May 12, 2022, singing the national anthem ‘Jana Gana Mana’ will be mandatory in all madrasas across the state. The UP government has directed all the teachers and the students of all the madrasas to sing the national anthem before commencing classes every day.

In the order issued on May 9, the registrar said, “It is to be conveyed about the singing of the national anthem in the morning before the commencement of classes in madrasas, that in the meeting of the Uttar Pradesh Madrasa Education Board held on 24th March 2022, it was decided that in all the recognized/ aided/ unaided madrasas, from the upcoming academic semester, it will be mandatory for all the students (boys and girls) and teachers to sing the national anthem (starting from ‘Jana Gana Mana Adhinayak Jai He Bharat Bhagya Vidhata’ up to ‘Jai He, Jai He, Jai Jai Jai Jai He’) in a coordinated tone with other prayers before the commencement of classes.”