After UP, it’s Haryana which wonders if it should have a law against ‘Love Jihad’ 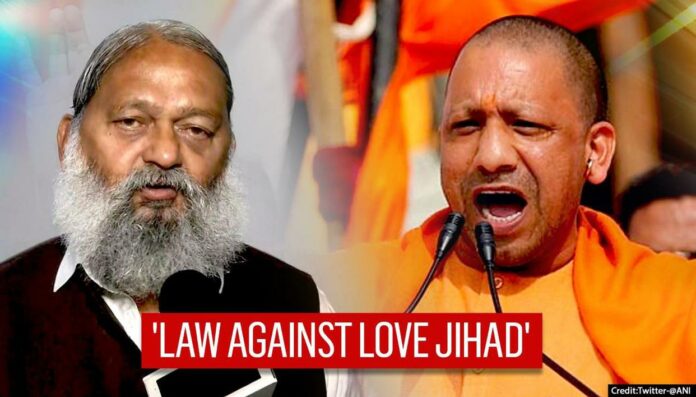 UP Chief Minister Yogi Adityanath is often compared to Hollywood star Vin Diesel, mainly for his bald pate and often violent language. Because of his peculiar diction, and turn of phrase, he has his own band of admirers and enough haters too.

Bearded and sagely looking Haryana Minister Anil Vij said on Sunday that Haryana government was also thinking of bringing a law against “Love Jihad”. This announcement comes in the wake Yogi Adityanath saying his government may bring this law soon.

Two unrelated events seem to have contributed in some measure to this thinking of the UP and Haryana governments. In Haryana, a 21-year-old girl student, Nikita Tomar, had lost her life when she was shot dead by a man called Tauseef. The man who shot dead Tomar was earlier her class-fellow and pressuring her to marry him.

This was a clear case of trying to force the Hindu girl to convert to Islam and then get married to Tauseef. The incident of shooting was captured in CCTV footage and it had gone viral later.

In UP, a judgement of the Allahabad High Court on religious conversion for the sake of marriage  triggered Yogi Adityanath comments. The UP CM had said in Jaunpur that “Allahabad High Court has said that religious conversion for the sake of marriage alone was not necessary”. Based on this, his government will bring a new law to keep “mothers and sisters safe”, he said.

In his typical style, Yogi Adityanath said that those trampling on the honour of women, a reference to those involved in Love Jihad, should be ready for “Ram Naam Satya Hai” yatra. They are being warned that they should mend their ways.

On Friday, the Allahabad High Court had dismissed a petition filed by a couple and said that the Muslim girl had converted “only for the purpose of marriage”. Incidentally, she had converted and embraced Hinduism in June, and got married in July according to Hindu rituals.