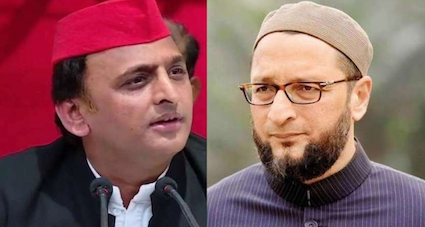 AIMIM would not enter into any alliance with Samajwadi Party (SP), irrespective of whether a Muslim is made a deputy chief minister or not. It was clarified by the party, upset at rumours floating on social media on the same count.

The Uttar Pradesh assembly polls are to be held in February next year.

However, Owaisi’s ally, SBSP president Om Prakash Rajbhar had proposed at the start of this month that five CMs and 20 deputy chief ministers could be made if the party is voted to power in 2022.

AIMIM has declared that it would contest 100 seats in UP.

AIMIM won 5 of the 20 seats it contested in the 2020 Bihar state polls. It also retained 44 seats in the Hyderabad civic polls. In Bengal though it failed to win a single seat. In local body polls in Gujarat, AIMIM bagged 17 seats in three municipalities in the state.