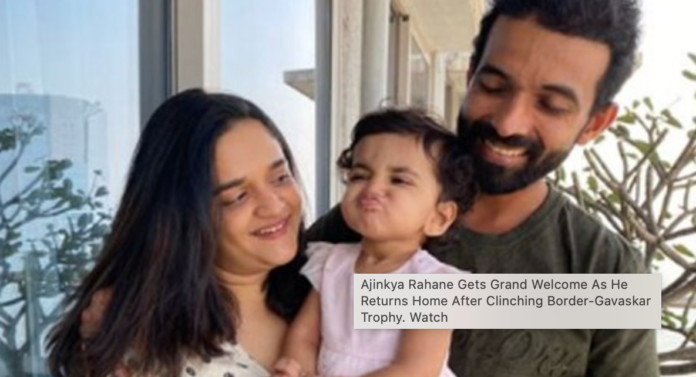 Ajinkya Rahane, the captain-hero of India’s stunning series win in Australia, ireturned home on Thursday and received a grand welcome from fans.

In a viral video that is doing the rounds on social media, Rahane, who arrived in Mumbai from Australia along with four other members of Team India earlier in the day, can be seen holding his daughter as fans shower flowers on the India batsman.

Rahane led Team India after the first Test of the four-match series in Australia as Virat Kohli came back home on paternity leave.

Rahane was tasked to lift the mood in the camp after India were bundled out for 36 runs in the second innings of the Adelaide Test match.

The Mumbai-born led from the front in Melbourne and scored a fine century to guide India to victory and level the series at 1-1.

The visitors managed to secure a hard-fought draw in Sydney and then registered a famous win at the Gabba in Brisbane to win the series, 2-1.