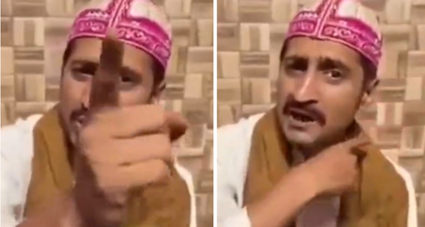 The Ajmer police have registered a case of abetment to murder against Ajmer Dargah Khadim Salman Chishti, reports News 18 India. The case was filed after a video of Chishti went viral on social media platforms in which he threatened to kill the former spokesperson of Bharatiya Janata Party (BJP), Nupur Sharma.

Earlier in the day, Chishti released a video wherein he claimed that he would hand over his house to anyone who brings Sharma’s head. A case has been filed by Ajmer Police in the matter. Chishti is a history-sheeter with over 13 cases filed against him, including murder and attempt to murder.

The video released by Chishti is similar to the one that was created before killing Hindu tailor Kanhaiya Lal in Udaipur. It is being said that the video is around 4-5 days old. In the video, he said, “I swear by my elders, I swear by my mother, I will shoot her openly. I swear by my children, whoever brings Nupur Sharma’s head, I will give this house to him.”

Further, he described himself as a ‘true soldier of Khwaja’ and tried to incite Muslims. As per reports, Khadim Gauhar Chishti of Ajmer Dargah had given a provocative speech during a silent procession taken outside the Dargah on June 17, in which slogans of “Gustakh-e-Rasool ki ek hi saza, sar tan se juda’ were raised.

After the video had gone viral, the Additional Superintendent of Police Vikas Sangwan said, “The investigation has been initiated in the case after registered FIR under relevant Sections of the Indian Penal Code.”

At least two individuals—Kanhaiya Lal and Umesh Kolhe—have had their throats slit for merely extending support to Nupur Sharma on social media in protest against the death threats and unwarranted hounding she had been receiving for standing up against insults meted out on her faith and its Gods.

(This piece is taken courtesy OpIndia)