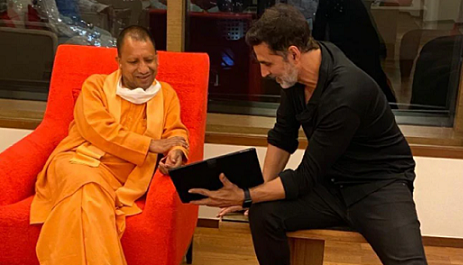 The actor met the chief minister for dinner at the Trident Hotel in Mumbai.

The film, which will be directed by Abhishek Sharma, aims to chronicle the story of the Ram Setu bridge.

Bollywood producer Rahul Mittra had earlier told new agency PTI that Yogi Adityanath is scheduled to meet a delegation of Bollywood filmmakers on Wednesday to discuss the future of the proposed film city in the state.

In September, the Uttar Pradesh chief minister had unveiled an ambitious plan to set up a film city in Noida and rolled out an open offer to the film fraternity to come to the state for filmmaking.

The chief minister is set to launch a Rs 200 crore Lucknow Municipal bond on the Bombay Stock Exchange on Wednesday.

“Uttar Pradesh has borders with seven states and one country. This is the cultural centre of the entire country. World’s oldest city Varanasi and Lord Ram’s birthplace Ayodhya, both are in the state,” Adityanath said. “The new film city will be near the historic city of Hastinapur as the land identified is close to the city. Hastinapur has tremendous contribution in the history of our country. Film city will be between the holy rivers of Ganga and Yamuna,” he added.