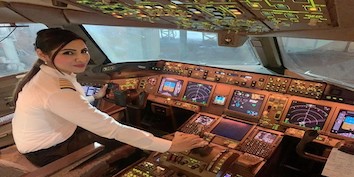 It’s the longest commercial flight in the world, operated by Air India, and travelled 16,000 km to reach its destination in its inaugural flight.

It went over North Pole and took the Atlantic route to reach Bengaluru.

The flight was commanded by Captain Zoya Aggarwal. She has flight experience of over 8,000 hours. She has been flying for over 10 years.

Today, we created world history by not only flying over the North Pole but also by having all women pilots who successfully did it. We are extremely happy and proud to be part of it. This route has saved 10 tonnes of fuel: Captain Zoya Aggarwal at Bengaluru airport https://t.co/wRyNNKC4GJ pic.twitter.com/q8jZgB6HBt