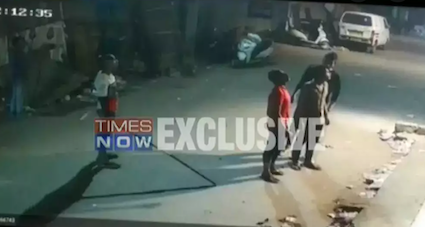 As the investigation into the Jahangirpuri violence in northwest Delhi on April 16 continues, Times Now claimed it’s in possession of a footage from a CCTV which is a giveaway of a pre-planned conspiracy.

The footage is of a day before the violence.

The footage shows alleged conspirators of the April 16 riot witnessed in Jahangirpuri during a Hanuman Jayanti procession.

In the video, some people armed with sticks, rods and stones could be seen gathered close to C-Block where the violence took place on Saturday evening. The men could be seen roaming in the area around 2 am on April 15.

The video shows about seven men in the middle of the night on a deserted street, armed with sticks, rods and stones. It is suspected that they were conspiring about something.

At least nine people were injured in the violence, including eight police personnel and one civilian.

Fourteen people, including the “main conspirators” Ansar and Aslam, have been arrested by the police so far.

Meanwhile, a protest organised by the Social Democratic Party of India (SDPI) at Jantar Mantar in the national capital on Saturday has come under the lens of the Delhi Police.

One person can be heard saying in a video of the protest that people dressed as monks are giving rape threats to Muslim women these days. The Delhi Police are probing whether the people at the protest site were from the Jahangirpuri area of Delhi and whether they were involved in the riots on Saturday evening.

It may be noted that the SDPI is the political wing of the extremist organisation the Popular Front of India (PFI), which is banned in several states.

Meanwhile, in violence-hit Jahangirpuri, the situation remains under control with a heavy deployment of security personnel. The forces will remain stationed there till complete normalcy returns to the area,, said officials.

It may be recalled that clashes had started between two communities during a Hanuman Jayanti procession on Saturday evening. Police have said that stone-pelting and arson took place during the clashes and some vehicles were also set on fire.

Delhi Police Commissioner Rakesh Asthana Monday said they will continue to deploy men in the sensitive areas till the time the situation returns to complete normalcy.

Asthana was quoted as saying, “We have deployed adequate force not only in Jahangirpuri but in other areas also. We will use technology for surveillance and are monitoring the situation to make sure that no untoward incident occurs in the future.”

As per details available, the police have closed access to the road in front of the mosque where the violence had reportedly started. The entire area has been barricaded by police and cops have also set up tents there.

More than 500 police personnel and six companies of additional forces are stationed in the area round the clock.

The police have also deployed tear gas gun parties and water cannons in the area and rooftop surveillance is being conducted using drones.