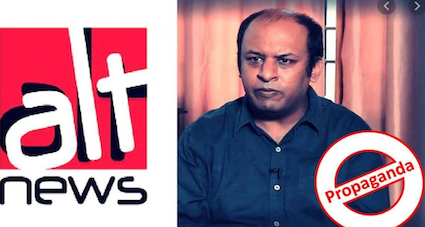 Alt News, on Wednesday, came up with an alleged ‘fact-check’ to give a clean chit to the Congress party against the ‘toolkit’ that lays a comprehensive plan for Congress supporters/volunteers to use the pandemic and target Narendra Modi government.

They hurriedly came up with such dubious arguments that even common social media users were able to question those claims.

One of the sections in the alleged toolkit asked the Congress supporters to not respond to covid SOS messages unless Indian Youth Congress (IYC) is tagged. Now, to show it as baseless, the Alt News shared a screenshot of the one user named Swati and declared that she did not tag the IYC and yet received help.

However, an activist Ankur Singh pointed out how, to back their claims, Alt News selectively chose those tweets that didn’t mention or tag the IYC handle when she had specifically used the hashtag created by the Congress youth wing.

After getting exposed, they silently altered their report and replaced Sakshi’s tweets with journalist Aditya Raj Kaul’s tweets claiming that while the journalist didn’t tag the IYC handle or used any hashtag related to them, he still got help from them.

It shared a screenshot of Kaul’s SOS tweet that was put out on 11:00 PM, May 18 to claim that Congress had helped the journalist even though he had not tagged them.

Now while justifying the fact that help was given to all without any biases by Congress, they mistakenly proved another point true that mentioned, “Calls from journalists, media professionals, and other influencers on a priority basis”

It is pertinent to note that while the journalist didn’t tag the Congress party, he still got the help despite several other twitter SOS messages under the same hashtag, tweeted at the same time, remain unattended.

Beyond that, particularly choosing Alt News for the checking the toolkit also talks about the close links Congress shares with the paid propagandists and questions the credibility of International Fact-Checking Network which certifies such fact-checker websites.