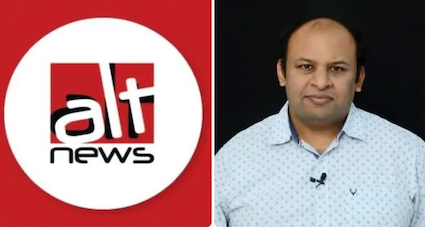 The office of the Registrar of Companies (RoC) in Ahmedabad issued a notice to Pravda Media Foundation, which runs the so-called fact-checking site Alt News, for alleged violations of several provisions of the Companies Act, 2013. The notice was sent on 22nd June 2022 after the Registrar received a complaint regarding alleged violations from a Chartered Accountant. The complainant Shshank Saurav tweeted about the notice on 30th June 2022.

The ROC has also sent copies of the notice to Pravda Media Foundation Managing Director Nirjhari Mukul Sinha, Directors Pratik Mukul Sinha and Mohammed Zubair. It may be noted that Pratik and Zubair are co-founders of Alt News, while Nirjhari Sinha is Pratik Sinha’s mother. A copy was also sent to the complainant Shshank Saurav. The company has been asked to furnish its reply to the complaints along with documents as proof within 15 days.

If Pravda Media fails to respond to the notice, appropriate action will be taken against the company and its directors as per provisions of the law, the notice added.

The CA, who is also a writer and participates in TV debates, tweeted, “Prateek Sinha, Mohammed Zubair, and other directors of Alt News, run under the Pravda Media Foundation, have been issued notices by ROC Ahmedabad on charges of violation of several sections of the Companies Act, 2013. It is expected that proper facts will be presented on behalf of the Directors.”

However, the complainant Shshank has refused to share the details of the allegations against Pravda Media, as the matter is under investigation. In a subsequent tweet, answering a question about the copy of the complaint, Shshank Saurav wrote, “Issues related to non-compliance with the various provisions of Companies Act, 2013. Since the matter is under investigation, can’t share the copy as of now.”

The notice says, “This office has received a complaint (copy enclosed) forwarded by office of DGCOA made by Mr. Shshank Saurav which is self-explanatory. Therefore, you are directed to submit comments/explanations on each point of allegations along with documentary proof to this office within 15 days from the date of receipt of this letter, failing which penal action as contemplated under sections 447/448/449 and/or the relevant contravened provisions of the Companies Act, 2013, may be initiated against the company and its Directors without further notice.”

It is notable that Alt News co-founder Mohammed Zubair was arrested on June 28 by the Delhi Police for hurting religious sentiments via derogatory social media posts targeting Hinduism. He was booked under Sections 153A and 295 of the Indian Penal Code. The FIR was based on a tweet by Twitter user @balajikijaiin where the user had shared a screenshot of an old tweet by Zubair in which he had mocked Lord Hanuman. In the tweet, @balajikijaiin had tagged the Delhi Police and had asked them to take action against Zubair for hurting the sentiments of Hindus with his derogatory post against Lord Hanuman.

After the arrest, the donations received by Alt News have come into question and there are allegations that they received foreign funds without FCRA registration.