Amarinder warns Kejriwal and his AAP for ‘criminal conspiracy’ in Punjab 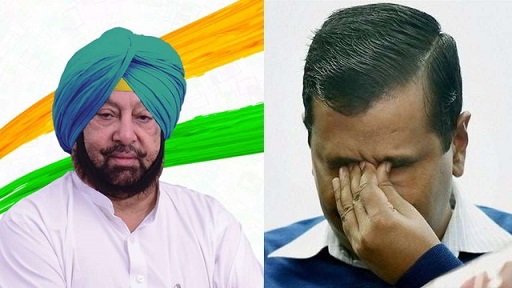 Punjab chief minister Capt. Amarinder Singh has warned his Delhi counterpart to stay out of his state and focus on managing his own turf.

Kejriwal had asked his AAP workers yesterday to travel across Punjab with an oximeter to identify the potential Covid patients—to find out if they had issues with oxygen levels in the blood.

“We don’t need your oximeters. We just need you to rein in your workers in Punjab, where they are trying to incite my people into not going to hospitals to get themselves tested and treated for Covid,” Amarinder Singh said.

Singh’s outburst was in response to a video in circulation which alleges that that state health departments has been removing the organs of dead Covid patients.

The state government has branded the video as fake and believes it has originated from Pakistan, distributed allegedly by a worker of Kejriwal’s AAP.

The worker, also named Amrinder Singh (31), has been arrested and is being questioned.

Sources claimed that Amrinder was reportedly a candidate for an AAP ticket to contest Assembly elections from Ferozepur.

Capt. Amarinder Singh felt Kejriwal’s move raised serious questions about the role of his party in a “conspiracy to undermine the Punjab government.”

He hinted at a “massive plot by elements inimical to the interests of Punjab”, disclosing that police had, this morning registered a case after a local journalist claimed he had been offered money to shoot a fake video on Covid.

“Such rumours provoking a section of the community to resist proper medical care, which needs to be provided to all Covid-affected citizens, … is a clear case of a deadly criminal conspiracy,” Mr Singh said.

Amarinder Singh has asked Punjab DGP Dinkar Gupta to closely look at the complaint on journalist and ensure strict action.