Amarnath Yatra stands cancelled this year due to Coronavirus 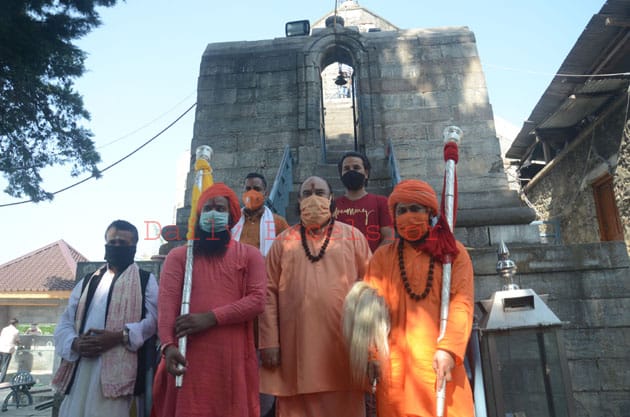 The annual Yatra to Shri Amarnath ji, sacred to Hindu devotees, was cancelled on Tuesday by the Shri Amarnath Shrine Board (SASB) headed by LG GC Murmu. The decision was taken at a meeting which was attended by board members and senior officials of the Union Territory (UT) of Jammu and Kashmir.

It was the perceived threat of terrorists last year due to the changed status of J&K into a UT due to which seen the Yatra had to be curtailed. This year it has been cancelled altogether due the unceasing spectre of Corona virus and the Yatra is a non-starter.

Till the last minute, the yatra had looked on course as the holy mace of Shri Amarnathji, called “Chhari Mubarak” was taken from Dashnami Akhara temple in Srinagar to historical Sharika temple on Tuesday. Earlier, on Monday, the holy mace had been taken to Shankaracharya temple on Sawan amavasya. (see image)

The holy mace of Lord Shiva is taken to some temples in Srinagar, at Pahalgam and elsewhere by sadhus, led by Mahant Deependra Giri Ji of Dashnami Akhara. This routine is followed before the start of  Amarnath Yatra every year.

The traditional route of the yatra is from Pahalgam to the holy cave via Chandanwari, Pissu Top, Sheshnag, Mahaganesh Top and Panjtarni. The 48-km trek is covered by pilgrims over three or four days. (See video of Sheshnag Lake below)

For the past few years, however, the yatra has also been undertaken from Baltal to Ganderbal district. The 16-km yatra is a one-day affair but passes through far tougher terrain.

The board took a final decision to cancel the annual Amarnath yatra only on Tuesday afternoon. Sources said the decision was taken during a SASB meeting presided over by LG GC Murmu.

The decision was taken apparently as a precautionary measure in view of the massive spike in virus infection cases. There was some speculation earlier that the yatra may be curtailed to 15 days from July 21 to August 3 (Shravan Purnima).

The details regarding the cancellation and conduct of the yatra by Mahant Deependra Giri Ji were not available. However, it is expected that Mahant ji, some sadhus and devotees will undertake the yatra in helicopters.

This is something that has happened on some earlier occasions also.

For the first time in 2020, Doordarshan had made arrangements for live telecast of the aarti from the holy cave twice daily. It has been seen by crores of people already. Presently, some pujaris and a heavy contingent of security forces personnel has been deployed at the holy cave. As such, the aarti is conducted twice daily on a regular basis.

Traditionally, the yatra starts on Guru Purnima and the last darshan is allowed on Raksha Bandhan day. Incidentally, the administration had made necessary arrangements for the yatra.

Amarnath Cave is a Hindu shrine located in Jammu and Kashmir. It’s at an altitude of 3,888 metres, about 141 km from Srinagar. The shrine is considered one of the holiest shrines in Hinduism. The cave is surrounded by snow mountains. The cave is covered with snow most of the year except for a short period in summer when its open to pilgrims. Hundreds of thousands of Hindu and other devotees make an annual pilgrimage.