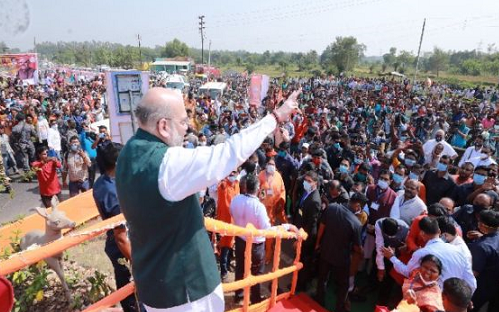 Union home minister and BJP’s poll-strategy mastermind, Amit Shah practically launched his party’s campaign for the West Bengal state assembly by claiming on the turf that it would a two-third majority.

“I started my two-day journey by garlanding the statue of Bhagwan (God) Birsa Munda. Since last night (Wednesday), I am in West Bengal and can sense the massive public anger against the Mamata Banerjee government. The death knell of Mamata Banerjee’s regime has rung,” he said to reporters in Bankura district, “We will form the next government in Bengal with a two-third majority.”

Shah, on a two-day visit to Bengal, was speaking at Jangal Mahal area, dominated by a tribal population which was one overrun by Maoists. Jangal Mahal is a stronghold of the Left—Basudeb Acharja has been a nine-time MP from this backward district. The five-year term of Trinamool Congress’ MP Moon Moon Sen from 2014 to 2019 saw little development.

“Mamata didi thinks she can block the BJP by blocking PM Modi’s schemes for the poor,” he said, referring to the PM-KISAN and Ayushman Bharat programmes.

There is a strategic reason for Shah to visit Bankura which is in south Bengal. BJP had registered a sweep in 10 districts in north Bengal in the 2019 Lok Sabha elections with a 40.5 per cent vote share in its favour across the stage.

However, the BJP had lost all nine seats in south Bengal in the last phase of the poll. Its presence is scattered in this region which it wants to consolidate, especially in the districts of South and North 24 Parganas, Kolkata etc.

Still it was a stunning improvement for BJP to have climbed from two seats in 2014 to 18 in the 2019 General Elections.

The assembly polls are likely to be held in April-May 2021.

Amit Shah will also visit the Matua Community along the border of North 24 Parganas as part of BJP’s Bengal outreach before he wraps up his visit.

Amit Shah is expected to meet senior party leaders and workers to strengthen its base and resolve. He would also take a first-hand view of party’s strength and weaknesses.