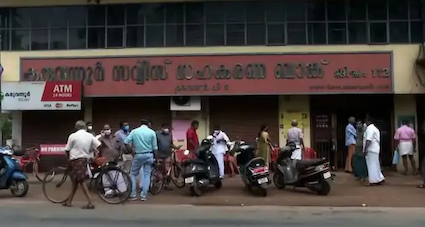 An alleged Rs 100 crore loan scam has been reported in a cooperative bank controlled by members of the ruling Communist Party in Kerala, as per a report.

After several people, including local customers, raised apprehensions about the bank’s functioning, an audit had been conducted there recently, in which the charges were reportedly found to be true.

The governing committee of the bank with 12 CPM members has been disbanded after the details of the scam were released in the public domain. The Iringalakuda police have registered a case against six employees, including the bank secretary.

During the inspection, it was also found that loans were sanctioned on the property pledged by local customers without their knowledge, and the loan amount was credited multiple times to the selected accounts, sources here said.

In another case, Sayilakshmi had no idea that her house was mortgaged against a loan of Rs 3 crore.

A senior police official informed that a case was registered against six bank officials, including the secretary of the bank, T R Sunilkumar,  under sections of IPC including 420 (cheating), 471 (using a forged document as genuine) and 120 B (criminal conspiracy.

It is also worthy to note that the Sunilkumar is a neighbourhood chief of the CPM.

Meanwhile, The Bhartiya Janata Party’s state unit has complained with Enforcement Directorate and the Income Tax Department. They have also alleged the involvement of top CPM leaders in the scam.