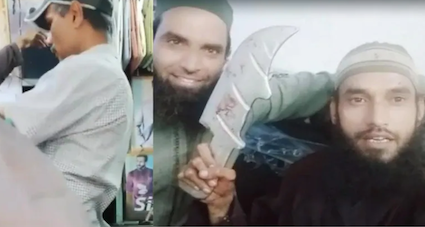 In a shocking incident, a shopkeeper was murdered in Rajasthan’s Udaipur for allegedly sharing a social media post in support of suspended BJP spokesperson Nupur Sharma, ANI reported. The gory incident took place in the Maldas Street on Tuesday.

Further, as per inputs, two men posted a video allegedly boasting about killing the shopkeeper, identified as Kanhaiya Lal, then waved large knives, and threatened Prime Minister Narendra Modi as well. Udaipur Superintendent Of Police (SP) Manoj Kumar said that a thorough investigation will be conducted into the incident. He also informed the media that a few accused have been identified.

“A heinous murder has been committed and a thorough investigation will be conducted into the incident. Few accused have been identified. Police teams constituted to locate the accused. We will take action on the video of men claiming to have committed the act,” Udaipur SP said.

Rajasthan Chief Minister Ashok Gehlot has condemned the heinous murder and appealed to maintain peace. He said that the strictest action will be taken against the accused.

“I condemn the heinous murder of a youth in Udaipur. Strict action will be taken against all the criminals involved in this incident and the police will go to the bottom of the crime. I appeal to all parties to maintain peace. Strictest punishment will be given to every person involved in such heinous crime,” Gehlot said.

BJP has also condemned the incident and demanded the strictest punishment for the accused. “I hope the Rajasthan government will ensure that the perpetrators are punished,” Union Minister Gajendra Singh Shekhawat said.