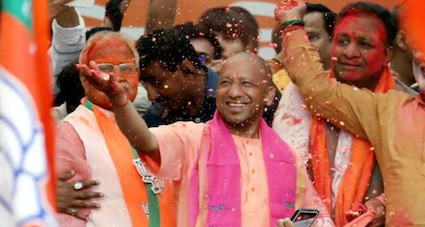 There are signs that the Bharatiya Janata Party (BJP), in its stupendous show in Uttar Pradesh, has managed to rise above traditional caste politics.

BJP had a 69% strike rate in the State, winning 255 of the 370 seats it contested and its wins were spread across different regions and traditional caste bases. It has reasons to be pleased on its show across main segments of the society: Brahmins, Thakurs, Jats, Yadavs, Dalits and Muslims.

The number of Brahmin votes in Uttar Pradesh is around 14%. In no less than 115 seats of the State, it is Brahmins who separate winners from the losers. That’s why from Mayawati to Akhilesh Yadav, political parties were wooing this segment of the electorates much before the elections were announced. Well, as the results have come out, BJP has won nine out of the 10 constituencies having Brahmin population from 90,000 to 160,000. The remaining one seat went to Samajwadi Party.

Dalits are another big tick in BJP’s gains. Not just from non-Jatavs, but also from BSP’s Jatav vote-bank. Even Maywati, the supremo of BSP, has conceded that Dalits opted overwhelmingly for BJP this time around.

Eight out of top 10 Thakur majority seats were bagged by the Bharatiya Janata Party. The ruling party was accused of favouring Thakurs since the chief minister Yogi Adityanath is a Thakur by birth. This class is considered to be the opinion-shapers in Uttar Pradesh.

However BJP, with its ally Apna Dal, has managed to win three out of these 10 Yadav strongholds. It won in Chhibramau and Bakshi ka Talab while BJP’s ally Apna Dal trumped in Kayamganj.

In terms of percentage, Jat voters constitute 6-7% of UP’s population. Significantly, it calls the shots in western Uttar Pradesh. After the farmers’ protest, it was believed that BJP would receive a setback in this region of the state.

However, none of this came true. Even though Rashtriya Lok Dal (RLD) managed to retain their core Jat voters, a large number still went for BJP. The party won most of the top 10 Jat populated seats.

Uttar Pradesh has some 20 per cent of Muslim population. They are said to be non-supporter of BJP. Still, surprisingly, BJP claimed two of the top 10 Muslim majority seats where the Muslim population range from 168,000 to 250,000. It won in Dhaulana and Saharanpur while the other eight went to Samajwadi Party. Notably, Asaduddin Owaisi’s AIMIM failed miserably.