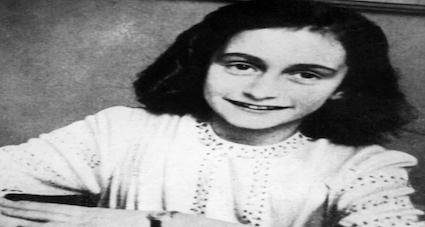 Most readers are familiar with the official story of Anne Frank, the young Jewish girl (aged 13–15) who kept a diary while hiding in a house from Jew-hunting “Nazis” in the Netherlands during World War II.

Publisher Clemens & Blair has just released a new book focused on the fraudulence of The Diary of Anne Frank. A number of other works examining the fraudulent Anne Frank diary have been published over the course of many years, most famously “Is the diary of Anne Frank Genuine?,” an article in English in 1982 by Robert Faurisson. But this new book surpasses the old ones in many ways.

Author of the current work, Ikuo Suzuki, a Japanese researcher, reviews a number of these earlier analyses of the diary in his new book, as does editor Thomas Dalton in his Foreword. As assistant editor.

From there, Mr. Suzuki explores new analyses of the diary, including an illuminating graphic depiction of the many changes among the many various publications of the diary over the span of decades. So numerous and detailed are the diary’s entries over 26 months that logical inconsistencies and physical and logistical impossibilities inevitably occur; Suzuki identifies many new ones. He calls some of this “Anne magic,” and indeed only a magical explanation can reconcile some of the diary’s many internal flaws and self-contradictions.

Suzuki’s book is arranged into five main chapters, each having four to nine sections. As an example of inconsistency among various published versions of the diary, Chapter 1 is titled “Absurdity on the Surface,” and one section is titled “The Translation of ‘Cat’ Into ‘Tarantula’.” This Chapter displays pictures and drawings of the “Annex” in which Anne Frank supposedly hid out with seven other Jews, along with examinations of physical and architectural impossibilities.

Suzuki goes on to explore “Absurdities Lurking in the Depths” in Chapter 2, closing with the section “Was Everything a Figment?.” Here we see pictures of diary pages themselves, and careful comparisons among the bewildering number of different versions of the diary published at different times in different languages. Here we find Suzuki’s unique graphic display of the many changes among the versions. For example, Anne Frank is said to have edited her own diaries at a later point in her time in the “hideout.” Edited is not the proper term when we see that one early entry in her Diary as presented in the English publish version is actually a combination of two entries more than a month apart from the original diaries.

The content of five missing pages of the diary that supposedly were found in 1998, and then two more “uncovered” in 2018. The five pages contain a scathing denunciation of Anne’s mother Edith and an oblique critique of her father Otto, but the two “uncovered” pages contain “perhaps the filthiest pornographic smut of the entire diary.”

Chapter 4 explores Anne’s writing career (or lack of it), the “infamous bookshelf door,” and the story of the beginning and end of the “hideout” (which is the chapter title). More pictures of documents and infrastructure assist the inquiry. This chapter engages in a staple of Diary doubters—handwriting analysis, and clarifies some former confusion. A letter Anne Frank supposedly sent in 1940—before the “hideout”—to a pen pal in the US was found, and when its handwriting is compared to the handwriting of the Diary, even an amateur analyst can see the two are different. It also debunks the absurd story—or stories—of how the diaries were finally found after the “hideout” inhabitants were hauled away by the Gestapo.

Chapter 5, “The Diary Unmasked,” explores the core issue of The Diary of Anne Frank, one that all revisionists have addressed: who really wrote the diary? Many speculate that Anne’s father Otto Frank was the actual author all along, but Suzuki excludes Otto as lacking the character, ability and motivation to forge the diary. He says: “there was at least one person in Otto’s vicinity who definitely possessed those qualities.” Suzuki’s in-depth profile and examination of this one person—Jewish playwright and journalist Meyer Levin—I found compelling. For instance, Levin’s relationship with Otto Frank included Frank appointing Levin his copyright agent in 1952. Levin’s history involved him working in the “Office of War Information” in the US, producing propaganda movies. Thus Levin had the presence and ability to invent the Diary as on-going war propaganda.

Suzuki closes with a touching Afterword he calls “Annelies Next to You,” in which the focus of our outrage is inverted from the evil “Nazis” to those who would fabricate lies in Anne’s name. This is a virtue of this book; Suzuki never blames Anne for the fraud, but rather points the finger at other Jews. “Not a single word in (the diary) contains her truth. It is merely a prison for Annelies’ soul, covered by a thick wall of falsehood in the name of a legend.” Our compassion should be for the real Annelies (her full name) Frank who has been so brutally used and misrepresented to promote a Jewish victim/”Nazi” perpetrator agenda.

The book closes with my Postscript, where, as stated, the five “missing” and two “uncovered” pages bring us up to date on diary developments. Unfortunately, Revisionists can also generate myths to their discredit, and one of these is the “ball-point pen” story. Hopefully I put to rest the claim that the diary is a fraud merely because it was written in ball-point pen, which was not invented until 1950. (Only two attached notes were written in pen, but nothing in the diary text itself.) The Postscript is framed as “Re-Rebutting the Anne Frank House,” which is the lavishly funded and well-organized foundation administering the “hideout” building itself as a museum, curating the diaries themselves (though not all are displayed), and issuing the on-going education about the iconic Jewish victim of “Nazi” tyranny, Anne Frank. I believe that just about the only point on which the Anne Frank House is correct regarding the diary is its position on the ball point pen issue. Everything else is tendentious and misleading propaganda, or outright deception.

In the words of main author Suzuki: “All other textual information, even the testimonies of friends and relations, is too biased and too fraudulent to be believed.” As he carefully demonstrates, there is so little truth to the diary itself that one can hardly accept any of it as valid.

This is one of those books that in parts of a couple sections presents such exhaustive detail as to make reading tedious, while at the same time my fascination with the revelations drew me onward. Suzuki could not completely resist the temptation to depart from a strict scholarly tone and lapse into humor—but neither could Dalton or I. I suppose this has to be accepted in such revisionist material, as we see all over certain “free speech” social media platforms. The lapses are rare and brief however, and the depth and scope of scholarship prevail.

If I have any final critique of Unmasking Anne Frank, it is that it treated the perpetrators of the hoax too lightly, failing to express the appropriate loathing and contempt and even criminal accusations they deserve. Suzuki’s compassion is for Annelies, who was so cruelly used by these criminal fraudsters, but he expresses not enough outrage at those who exploited her posterity. We are all victims of the fraud as well.

Unmasking Anne Frank by Ikuo Suzuki, including the excellent Foreword by editor Thomas Dalton and Introduction and Postscript by myself, achieves the difficult task of summarizing and updating previous diary revision, while presenting new crucial insights. The end effect is to drive a dagger of certainty into the bleeding heart of Diary pathos. Suzuki’s detailed biographical analysis of the person he concludes actually wrote the diary—Meyer Levin—is the climax of a book filled with stunning insights. This book has much to consider for those new to Diary doubt, and much more to ponder for those already familiar with Anne Frank revisionism. Unmasking Anne Frank is, without doubt, the best such revisionist text ever produced; it is not only a great contribution to diary revision, it may be a culmination.

(This book review, written by Karl Haemers is published with gratitude to the Occidental Observer)