Another Hindu temple vandalized in Pakistan on Janmashthmi 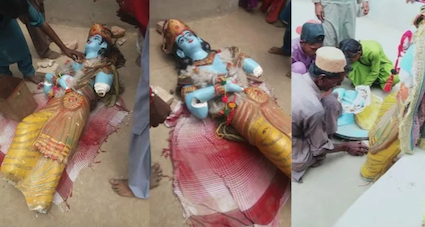 Islamic fundamentalists in Pakistan vandalised a Hindu temple in the middle of a celebration of Janmashtami in Sindh province on Monday. The Islamist mob broke the idol of Bhagwan Krishna during special prayers held to mark the birth of the deity.

According to a report, the Muslim mob was armed with weapons, sticks and bamboos and attacked policemen deployed at the temple and also burnt down a part of the temple.

Journalist Aditya Raj Kaul took to Twitter and posted pictures of the vandalised Krishna Idol. In pictures, the idol can be seen lying and people were trying to secure the broken pieces of the Krishna idol together.

Earlier this month, hundreds of people had damaged a Hindu temple in Bhong city of the Rahim Yar Khan district, some 590 km from Lahore. Recently there had been many cases where men had vandalized Hindu temples. Since 2020 seven Hindu temples have been vandalized and destroyed by Islamists in Pakistan.

While Hindus form the biggest minority community in Pakistan, with the majority of them settled in Sindh province, there had been little done by the Imran Khan government to address the situation.