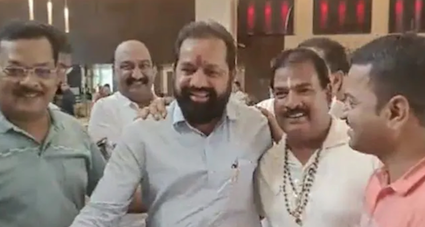 As Dilip Lande, an MLA from Chandivali constituency, turned dissident and moved to Shiv Sena Rebel Eknath Shinde’s camp, the overall number of turncoat MLAs has increased to 38. With the recent addition, the Shinde-faction now has the support of over 50 MLAs with 12 independents, as per sources.

As Dilip Lande entered the hotel, MLAs present there shook hands and embraced him in elation. Notably, the Maha Vikas Aghadi (MVA) government plunged into crisis on June 20 as a rebellion erupted in the party after MLA and a Minister Eknath Shinde led-rebel faction moved to Surat and then to Guwahati.

With the inclusion of Dilip Lande, the Shinde faction is expected to send a fresh letter to Governor Bhagat Singh Koshyari and Deputy Speaker Narhari Zirwal to claim the support of over 50 Shiv Sena MLAs and 12 independents.

In a stern warning by Maharashtra Chief Minister and Shiv Sena Chief Uddhav Thackeray, an ultimatum has been served to all the defecting MLAs to report to him within 24 hours for a one-to-one meeting else disciplinary action will be taken against them. Sources said that no further talks will be held with them if they don’t return within 24 hours.

BJP’s Pravin Darekar wrote to Maharashtra Governor Bhagat Singh Koshyari and asked for his intervention into the 169 Government Resolutions (GRs) issued by the state government amid the political crisis.