Anurag Thakur doubles down on Gandhis, both personally and politically 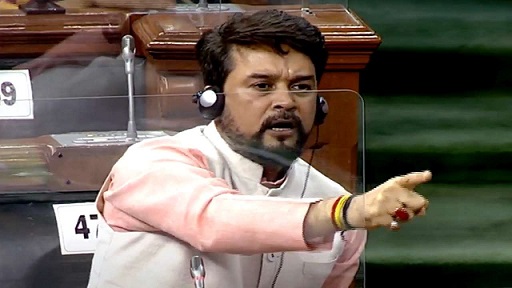 Anurag Thakur, junior finance minister in the Modi government, doubled down on Gandhis both personally and politically in a lively riposte in Lok Sabha on Saturday.

From attacking Congress chief Sonia Gandhi for going abroad for treatment while Monsoon Session of the Parliament was on, to alleging a diversion of funds, misuse of properties by foundations controlled by the Gandhis and getting funds from ministries and public sector companies, Thakur led the attack on the opposition in response to questions on the PM CARES fund.

The government said that the PM CARES fund is a registered charitable trust and the Prime Minister and other key cabinet ministers are ex-officio members in a framework that will now be institutionalised.

“The PM-CARES fund was registered on March 27, 2020, under the 1908 Act. An independent auditor was appointed. Nobody is forced to donate to this fund. The members of the trust are all ex officio members such as Prime Minister, Minister of Defence, Minister of Home Affairs and Minister of Finance,” Anurag Thakur said.

Deflecting the demand for PM CARES to be brought under the Comptroller and Auditor General (CAG), he said, “Those who are demanding CAG audit for this trust, are they ready for the audit of all the trusts being managed by one family?”